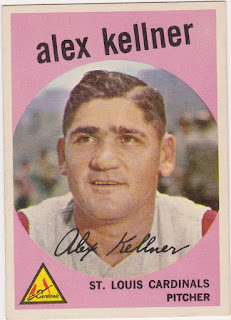 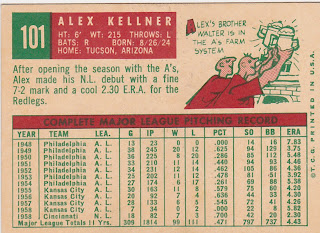 Signed out of Tenssesse by the Cincinnati Reds in 1941 lefty Alex Kellner only had time to pitch one year of (pretty good) minor league ball before the U.S. Navy became his four year home during WWII. After his service in the Pacific (details are here) he briefly returned to semi-pro baseball and then was back in the pros with the A's organization in 1947.

He got a taste of the bigs in 1948 but had an outstanding true rookie season in 1949 in Philadelphia. That year he won 20 games (of the teams' 81 under Connie Mack) and made the All Star club. He was the first to win 20 for the A's since Lefty grove in 1933. Even for a war-seasoned, not-so-young rookie that had to be heady stuff. He was second to Roy Sievers in Rookie of the Year balloting in the A.L.

He remained a member of the A's starting staff (in Kansas City) through 1957. Although he managed to pull down double digit win seasons along the way (and one 20 loss season) he never re-captured the magic of that rookie season. For parts of two seasons he had his brother Walt Kellner as a teammate.

In 1958 he was waived and picked up by the Reds and then traded, despite doing some of his best pitching in half a decade, to the Cards for 1959. He pitched his last innings in June of '59. This card represent the last season and final stop in a respectable career. He was a good hitting pitcher, hitting .215 with four homers.

This picture, with Kellner in a Red's road top, has the L.A. Coliseum in the background so it was shot on one of the Reds trips to the Coast after he was traded from the A's in 1958. The Reds were in L.A. in July and August.
Posted by Commishbob at 6:00 AM