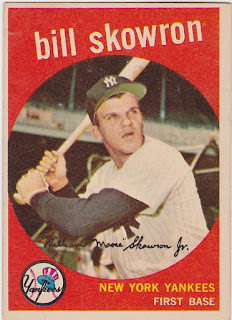 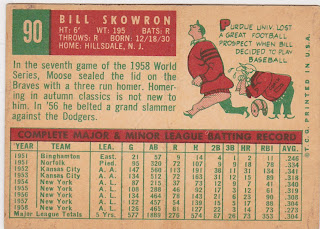 A Chicago native Bill "Moose" Skowron went to Purdue on a football scholarship. But he also played baseball and when he hit .500 in his second season for the Boilermakers (a Big Ten record that held up for a decade) he was headed for a career on the diamond. He signed with the New York Yankees in 1950 and after three very impressive minor league seasons he debuted with the Bombers in 1954.

After initially platooning with Joe Collins he won won the first base job and in the nine seasons he was there the Yankees won seven league pennants and four World Series championships. He made five All Star squads during his Yankee tenure. He almost always seemed to come up big in the postseason. In eight Series (including the 1963 Series when he was a Dodger) Skowron batted .293 with eight homers and 29 BRIs.

He hit a grand slam in the 1957 Series and in the 1958 World Series he homered in Game One, drove in the winning run in Game Six, and hit a three-run home run in Game Seven.

In 1963, Skowron was traded to the Dodgers and he won a fifth World Series championship as the Dodgers pulled off the sweep over the Yanks. An interesting insight into Moose comes from his NY Times obit:

Notwithstanding his menacing presence, Skowron was a gentle person, and he harbored no feelings of revenge after hammering his former Yankee teammates in the 1963 World Series.“I was miserable,” he recalled in [Richard Lally's book] “Bombers.”“Twelve years I was with New York, three in the minors, nine in the majors. I loved those guys and it killed me to beat them. My uniform might have said Los Angeles, but in my heart I was always a Yankee.”

That was his only season in Los Angeles but he went on to play for the Senators and White Sox before retiring after the 1967 season. In 14 seasons Skowron had a .282 batting average, hit 211 home runs and batted in 888 runs in 1,658 games.

After his playing days he worked in community relations for the White Sox. He died in April of last year. His All Star card form this set was featured in the summer of 2011.

Two final things... his 'Moose' moniker came from his childhood post-haircut resemblance to Benito Mussolini. It stuck. And I found a cool picture of Skowron and Roy Campanella taken at Ebbetts Field at a 1957 exhibition game. 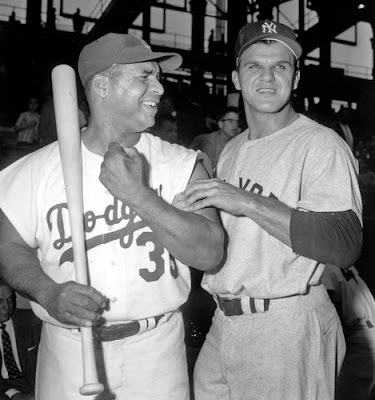