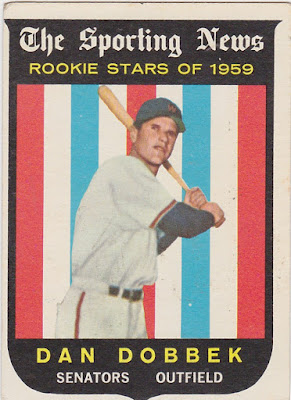 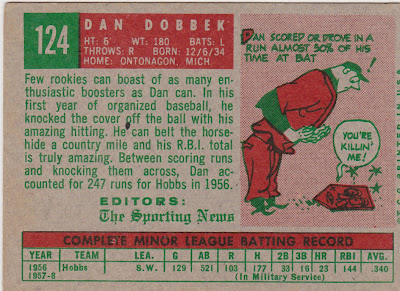 Dan Dobbek signed with the Senators in 1955 and, after a side trip to the military, rose through the minors with a reputation as a power hitting outfielder. He never did produce at the major league level and was gone from the bigs after 1961.

Dobbek was called up by the Senators in September of 1959, put in rightfield as the starter and spent the final month of the season in that role. He hit his first (of 15 total) big league homer off Billy O'Dell that month. He was a semi regular in 1960 and got into 110 games hitting .218 with ten homers. In an April game against the Red Sox he tied a major league record by receiving three intentional walks.

His final season came after the Nats moved to Minneapolis/St. Paul and became the Twins in 1961. That year on May 19th he hit the first grand slam in Metropolitan Stadium. That was the second two homer game of his career, both came against the Athletics.

He was dealt to the Reds after that but never made it back to the majors. He says his career was cut short by a collision with the outfield wall against the Athletics. He finished as a pro with a couple more minor league seasons and then retired. Baseball Reference reports that he lives in Oregon.