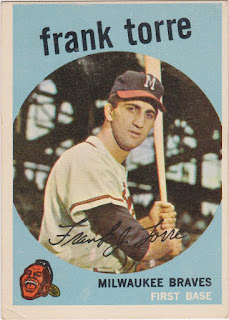 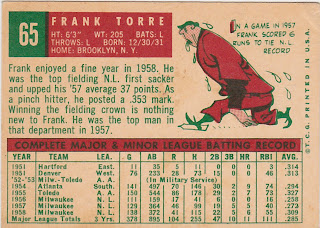 Frank Torre may not have had the baseball success enjoyed by his younger brother Joe, but he did alright for himself after signing with the Braves out of Brooklyn's St. Francis Prep in 1951. After a year in the minors, two in the service and two more back with the Braves farm clubs Torre debuted in 1956.

For four years with the Braves he either held down the first base job or split time with Joe Adcock. Torre hit two homers and batted .300 in ten at bats in the 1957 World Series win over the Yankees. 1958 was his best season as he hit over .300 and had career highs in homers and RBI. The back of the card write up makes note of his fielding prowess at first base.

His numbers dropped in 1959 and by the following season he was back in the minors for a long stretch. After another full minor league season he was sold to the Phils for 1962 and he hit .310 for them in a part time role. He retired after 1963 to work for the Rawlings Sporting Goods Company.

In later year Torre received both a heart and kidney transplant. He is the father of one time Pirate prospect Frank Torre Jr. who currently coaches high school ball.

I really am partial to this card. Looks like the Polo Grounds in the background, the light blue frame compliments the Braves uni and card logo, the 'M' cap is one of my favorites and, maybe most of all, Frank Torre looks like and extra from the original Oceans Eleven that starred Frank Sinatra and Dean Martin among others.