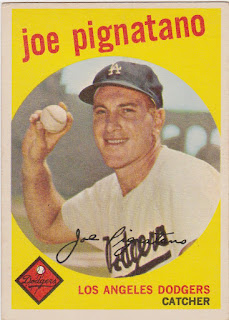 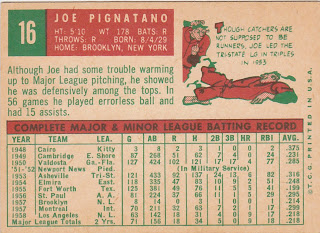 Catcher Joe Pignatano was signed off the streets of Brooklyn in 1948. Debuting for the Dodgers that very year was a guy named Roy Campanella. If Joe had only known. And he nearly didn't make a career of it according to his SABR bio. Read the part about his mother calling the Dodgers front office. Nice.

But he patiently worked his way up the Dodger system, served two military years, and made the big club in 1957. When Campy suffered his spinal injury that winter Pignatano was plugged in behind the plate along with Johnny Roseboro. He played with the Dodgers through 1960 and earned a World Series ring in '59. He was sold to the A's for the '61 season and had his best season while getting a career high of nearly 300 at bats. After a season (1962) split between the Giants and Mets Pigatano was back in the minors for a few years before he became a coach with the Senators, Mets and Braves. In those first two coaching jobs he was working under his friend and former teammate Gil Hodges.

Here is a strange but apparently true story culled from Pignatano's Bullpen page at Baseball Reference:


Playing for the Fort Worth Cats in 1955, Pignatano was listed as the number 8 batter in the lineup on May 29. In the second inning he went to the plate in the number 7 spot and hit a home run. On appeal by the opposing Shreveport Sports, the hit was nullified and the proper batter, Maury Wills, was called out. Pignatano then batted in the number 8 spot, and hit another homer.

And finally here is Vin Scully broadcasting the Dodgers game on the night of Joe Pignatano's MLB debut as a catcher. He asks anyone who knows the Pignatano family to call Joe's wife at home in Brooklyn to alert her of Joe's impending shot. This is why I love Vin Scully!


Turns out Joe did get into the game, taking over behind the plate for Roy Campanella who had been run for in the fifth as was asked to handle Sandy Koufax' fastballs. He singled in his first at bat and whiffed in his second.

The easily recognizable LA Coliseum looms behind Pignatano smiling face on this card. He sure looks different than I remember him a decade later with the Mets.
Posted by Commishbob at 5:30 AM