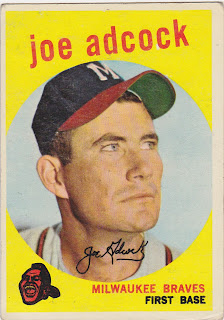 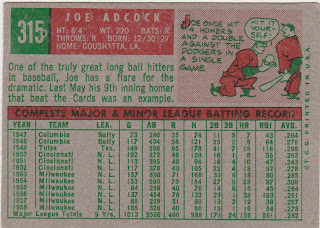 Joe Adcock spent 17 years in the majors with four clubs but had his best years with the powerhouse Milwaukee Braves teams of the mid-50s through early 1960s. Batting behind Eddie Matthews and Hank Aaron, Adcock hit 239 homers for the club in 10 seasons. Some of his homers were legendary.

Originally signed in 1947 out of LSU by the Reds, Adcock debuted as an outfielder with Cincinnati in 1950. He never took to the outfield (Ted Klusewski held down first base there) and requested a trade which was granted for 1953. That mind boggling four club deal landed him in Milwaukee. Adcock hit .285 for his career with the Braves and played on the Braves' Series clubs in 1957 and 1958.

Adcock is known for breaking up baseball's longest no-hitter on May 26, 1959. After Harvey Haddix of the Pittsburgh Pirates pitched twelve perfect innings, he homered in the 13th inning to drive in Felix Mantilla and give the Braves the win. But as he rounded the bases he inadvertently passed Hank Aaron and was called out.

After a below par 1962 season he was dealt to the Indians for a one year stretch and then was traded to the Angels where he played another three seasons. After he retired as an active player he managed the Indians to an 8th place finish in 1967 and managed in the minors for a season or so.

Later in life he was in the horse breeding business in his native Louisiana. He died after suffering the affects of Alzheimer's Disease in 1999. He's a member of that state's Sports Hall of Fame. His inductee page is good reading.

Nice portrait card of the guy nicknamed 'Billy Joe'. I like his signature on the card. Looks like something you'd see on the Declaration of Independence. Kind of reminds me of John Hancocks' sig. 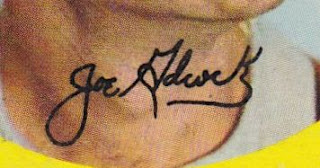