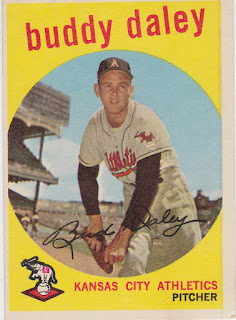 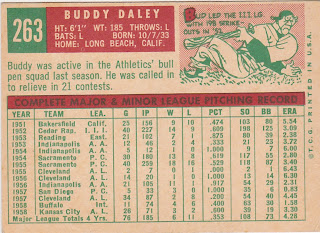 Born with a right arm partially disabled by a problem at birth Daley pitched well enough in the Pacific Coast League to draw the attention of several big league clubs and he signed with the Indians in 1951. He worked his way up the Indians' system and got a late look at the bigs in September of 1955. The following season he got another look and then he established himself in 1957 getting 10 starts in 24 appearances.

He was traded to the Orioles at the beginning of April of 1958 and then, without having appeared for the Birds, to the Athletics just two days after the season opened on April 15.

It was with the A's that Daley had his best seasons winning 32 games in 1959/60 and made those two All Star teams. He appeared in two of the four All Star Games held in those years (two each season, benefiting the players' pension fund) and allowed only a walk in an inning and a third while whiffing Ernie Banks, Vada Pinson and Orlando Cepeda.

Arm issues limited Daley's workload after 1962 and he was dealt to the Indians for the 1965 season but he was released as the season opened and retired.

Two things... I never heard him referred to as 'Buddy', always just 'Bud'... and that's a nice pic with the classic Yankee Stadium facade and grandstands behind him.