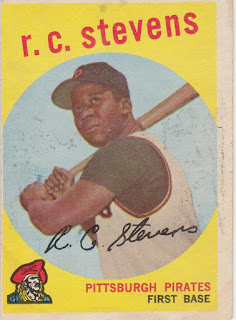 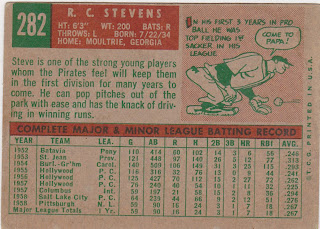 Hmmm, I need to upgrade this card. I thought I had grabbed upgrades for all the less than presentable '59s in my binder. Not sure how R.C. Stevens got past me. This one isn't damaged but it is stained and combining that with it being so far off center and some soft corners (scan makes them look better than they are) and it's now jumped up to #1 on my upgrade target list. There is a big TriStar show at the end of the month. Now I have a reason to go.

Anyway, the Georgia-born first baseman R.C. Stevens' given name is, well, R. C. Stevens. At least as far as I can tell. I see no other references to anything that those initials might stand for. Some places, Baseball Reference for example, list him as RC, no periods. Kind of like Harry S (with no period) Truman. Whatever.

Stevens signed with the Pirates in 1952 and began a long journey through six and a half years of minor league ball before hitting the big time in 1958 in Pittsburgh. Then again three of those seasons were with the Hollywood Stars so it couldn't have been too burdensome to hack it out on the West Coast.

He wasn't  with the Pirates the whole season in 1958 but the time he was there was well spent. He went two-for-two on Opening Day while driving in the winning run. He followed that with a pair of homers in the first week of the season. He lasted 90 at bats before being sent back down.

The next two seasons saw him get just into a few major league games with the Bucs while spending most of those years in the minors. A trade sent him to the expansion Washington Senators for 1961 and he hit that franchise's first pinch hit dinger. He again played sparingly, went back to the minors and retired after the '63 season.

He lived in Iowa and worked an assortment of jobs after retiring and he died in 2010. He is listed by Baseball Reference as the only major leaguer from Moultrie School for Negro Youth. But a little digging found one more player, John Glenn, a contemporary of Stevens, played with the Cards in 1960 and was at one time a Dodger prospect. His story is found here on a Moultrie school  reunion site. Stevens has a bio there as well and interestingly it lists his nickname as 'Seaboat'. That's kind of cool I'd say.

Hey, look what I found! It's the 1955 Hollywood Stars. R. C is there on the second row seated over on the right. A little to his left is Bill Hall a catcher also from Moultrie. The story of the the two of them meeting with the Stars is included in R.C.'s school bio linked above. Several other former and future big leagues are in the picture as well. 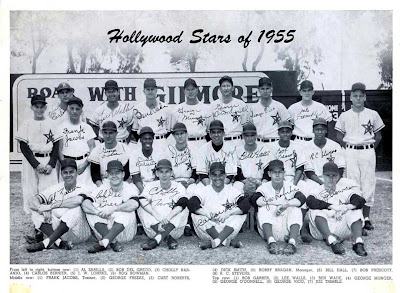 I was able to pick up a very nice copy of this card for $1.50. Much nicer and better than the scan shows. I'm not sure why my scanner insists on cutting the top border off some of my cards. A little digging into the settings and options may be in order. 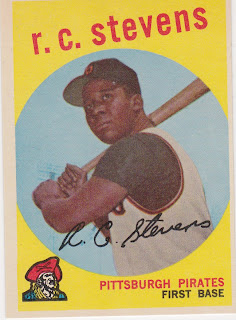