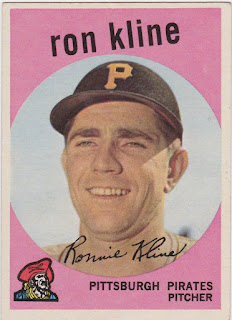 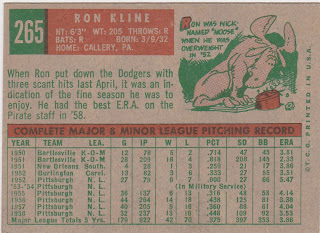 Ron Kline looks mighty happy for a pitcher who had lost 60+ games in the previous four seasons, was forced to wear a batting helmet every second he was on the mound and having to endure being in a pink framed card. He also appeared on the Buc's Hill Aces card in the 1959 set.

Kline began his seventeen big league year career with the Pirates in 1952 and then spent two years in the military. On his return he joined the Buc's starting staff and three times broke double digit wins. Unfortunately he also led the league in losses twice.

He was traded to the Cardinals for the 1960 season and as he traveled through damn near every organization in the majors he slowly transitioned away from being a starter. He had his best seasons with the Senators in the early 60s as a stopper. He led the A.L. in saves in 1965 with 29 and had 23 the next year. He also pitched for Angels, Tigers, Twins, Pirates (again), Giants, Red Sox and Braves before he retired following the 1970 season.

Kline's Bullpen page makes note of the fact that he is the only pitcher to defeat the Brooklyn and Los Angeles Dodgers, the New York and San Francisco Giants, the Yankees and Mets.

After retirement Kline served as mayor of his small Pittsburgh-area home town.

Posted by Commishbob at 9:39 PM