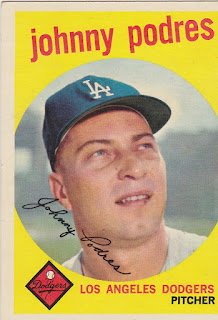 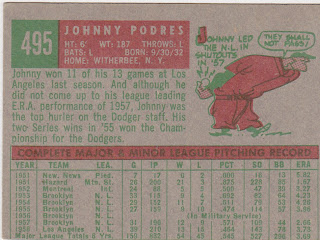 Lefty Johnny Podres will forever own a spot in Dodger fans' hearts. Particularly those fans with an interest in the history of the franchise. In 1955 Podres had gone 9-10 in his third year as a Dodger starter. Podres won both the 3rd and 7th game of that '55 Series and was named Series MVP for pushing the Boys of Summer to their only title.
Podres also pitched for four other Dodger World Series clubs, in '53 for the Brooklyn version and in '59, '63 and '65 (he didn't pitch in the 1965 Series) and was a combined 4-1 in postseason starts.
From his debut in 1953 through being dealt to the Tigers early in 1966 he won 136 games and lost 104 for the Dodgers with a 3.66 ERA. He added a dozen win for the Tigers and fledgling San Diego Padres before retiring after the 1969 season.
He's a member of the National Polish-American Sports Hall of Fame.
Sidebar: Podres was born in upstate New York. I was there (and all over that state) recently and it's one of my favorite places. History plus natural beauty. Some day if I'm lucky I'll retire to a spot in the Adirondacks.
Podres is also featured on one of my favorite cards ever, one I keep an eye peeled for online all the time. 1963 Topps #412 Dodgers' Big Three. 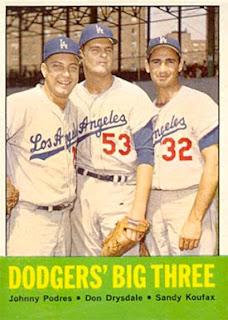 Read his NY Times obit for some nice Podres info. And check his website for additional pics.
Posted by Commishbob at 3:09 PM