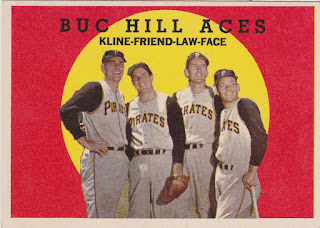 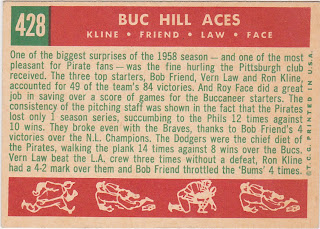 Ok, if Topps wants to call Ron Kline an 'Ace', who am I to argue? But when stacked up against the other three guys on this card his stats look sort of pale.
Kline was coming off a 13-16 record in 1958 for a Pirates club that finished 14 games over .500. He went 54-83 in six seasons with the Pirates. He hit his stride, though, with the Nats in the mid 60s as a reliever. He led the league with 29 saves in 1965.
Bob Friend won 22 games for the '58 Buccos and Vern Law chipped in 14. Elroy Face was coming off a season where he led the league in saves and was in the midst of one that saw him go 18-1 with 10 saves.
I look at these special multi-player cards and wonder why Topps didn't just use the same format as their regular 59s (have I whined about this before?). A stadium backdrop or scoreboard or just blue sky would have been so much nicer than the horribly cropped photo on a yellow circle.
This is the third copy I have acquired of this card. The first one had scribbling on the front that didn't seem to sink in when I pulled it from a fifty cent bin at a card show. The second one was an emergency replacement that had very soft corners. This one is a keeper, Ron Kline or no Ron Kline.
Posted by Commishbob at 7:30 AM