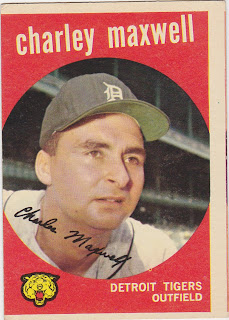 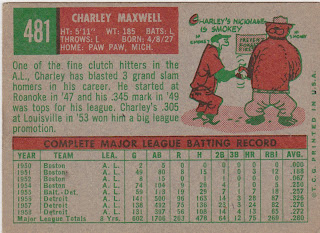 Charlie Maxwell, a.k.a. "Paw Paw" (he was from Paw Paw, Michigan which honored him in 2010) was known as a clutch hitter who was especially dangerous on Sundays.

Maxwell was originally signed by the Red Sox in 1947 and bounced around their minor league chain, making three limited appearances with the big club, though 1953. He spent the '54 season in Boston, was purchased by the Orioles for the '55 season, made four pinch hitting attempts for the Birds and was sold to the Tigers in May of that year.

He came into his own with the Tigers and played was a solid left fielder there for the better part of eight years. He made a couple of All Star squads and even garnered a few MVP votes here and there. He hit .326 in 1956 to go along with 28 dingers and 87 RBI. He topped that power output with career high homer (31) and RBI (95) totals in 1959. He holds the major league record for extra inning homers in a season. He had five of those in 1960.