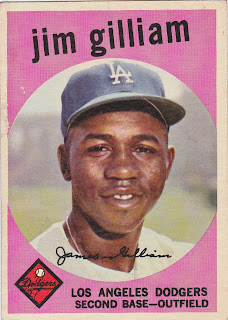 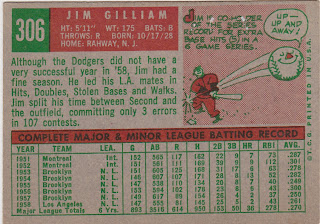 Jim 'Junior' Gilliam peers out of a pink framed '59 Topps in a picture taken during the Dodgers' first year on the West Coast. Gilliam was a Tennessee native who, after some semi-pro and Negro 'minor' league experience,  began his major pro career with the Baltimore Elite Giants in 1948. He played three seasons in Charm City, learning to switch hit, and making the All Star squad each time. Prior to the 1950 season Gilliam had been given a 'look' by the Cubs but he returned to the Elite Giants.

The young infielder was purchased by the Dodgers and played in Montreal for a couple of years putting up numbers that are very much like those he'd post with the Dodgers. He debuted with the Dodgers in Brooklyn in 1953 and promptly made his presence felt.


Gilliam was part of the Boys of Summer era and also the pitching strong Dodger clubs following their move to L.A. Gilliam went on to play on 7 National League champion teams and won four World Series rings. He played with the Dodgers until his retirement after the 1966 season. He had made two All Star teams and twice was among the top six in MVP voting. He coached for the Dodgers following his playing career using the experience he gained while serving as a player/coach in the final active years of his career. In all Junior Gilliam spent half his life in a Dodger uniform.

I just can't do justice to Junior Gilliam in a hurried blog post. There are some 'must reads' for anyone with an interest in his career both here on the SABR site and here in an ESPN feature..

From that ESPN site I loved this excerpt from a column by the great Jim Murray:

... You might say Jim is with the Dodgers but not of them. The distinction is important. He starts every season in the dugout. He sleeps every night with his bag packed at his feet and rumors of a trade swirling around in his dreams. He lives his life in a kind of limbo midway between the Dodgers and the rest of the National League. Then the season starts and some "phenom" begins to leak at the seams, the stuffing oozing out of him at every trip to the plate. The manager sets a hysterical search amid the bat bags, locker room towels and press clippings of his wunderkind — and there sits Jim Gilliam, waiting. ... When the Dodgers came to L.A., they brought Jim along with all the enthusiasm of a man asking his mother-in-law on the honeymoon. They had a hot-shot third baseman named Dick Gray, and began to offer Gilliam around like a claiming horse until Gray began to leak like a sieve in the field and strike out on balls the catcher couldn't get his glove on. Gilliam became a third baseman and the Dodgers became World Champions ...

The full column is found here in the LA Times historical city blog.  Other notable facts on Junior Gilliam.... He's the only Dodger to have his number retired who is not a Hall of Famer. He hit two homers in the '53 World Series even though he wasn't known for power. His favorite baseball card color was pink. (OK, that's bullshit)

His son Darryl played briefly in the Dodger minor league system in the mid 80s. Here is an LA Times interview with Darryl.
Posted by Commishbob at 11:28 AM