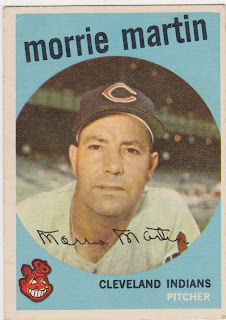 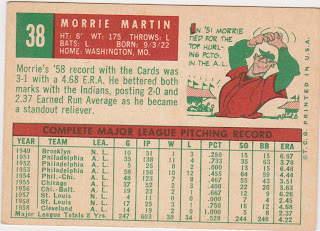 Night Owl posted the other day about how he'd like to write a book. It's based on a card that shows a moment in time that turned the fortunes of two baseball franchises (in opposite directions). It's a good read. But even before he writes his first book, I have a suggestion for his second one......
You may or may not know much about lefty pitcher Morris "Morrie" Martin. I know that before I began researching this card I probably hadn't crossed paths with him more than a fleeting time or two while looking at Oriole history. Martin was signed off a Missouri farm by the Chicago White Sox in 1941 and spent the year in their system. In '42 he pitched (under a working agreement it seems) with the independent St. Paul Saints. There in St. Paul one of his teammates was Dave Philley.
Late in '42 Morris, like many other American kids, shipped out for the European theatre of WWII. While serving in North Africa, Sicily and on D-Day he was, among other things, torn up with shrapnel, buried under a shelled house and left for dead and shot in the leg, almost losing it to infection. The whole 'Morrie Martin in war' story is chronicled here.
Following his service he returned to baseball and, after several seasons in the Dodger chain, debuted as a 29 year old rookie with the Bums in 1949. A 1-3 record earned him a trip to the minors. He re-emerged in 1951 with the Philadelphia A's and he won 11 games for them that year, 10 more in 1953. The rest of his major league career was an odyssey through the South Side of Chicago (where he was reunited with fellow 3 year service vet  Dave Philley....I wonder if they had any war stories to swap?!?), Baltimore, St Louis, Cleveland, and finally the North Side of Chicago briefly in 1959. He finished with a career 38-34 record.
Morris Martin, having survived so much on the battlefield, wasn't going to let a demotion by the Cubs deter him. He spent the 1960 season with the Houston Buffs and was signed by the fledgling Colt 45s (as was Martin's old pal Dave Philley) and traded to the Braves before hanging up his glove for good prior to the 1961 season.

By my count Martin played in 18 cities across North America and was a member of 18 different teams in one form or another and saw action on three fronts during WWII. Then he topped it off by living to the age of 87 back in rural Missouri in 2010. Full life I'd say. And to think I looked at Morrie Martin's '59 Topps card and wondered what I'd write about. Live and learn.

And here's a great shot of Morrie at a gathering of baseball/WWII vets in New Orleans a couple of years before his passing. 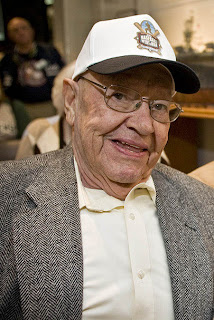 Posted by Commishbob at 8:51 AM