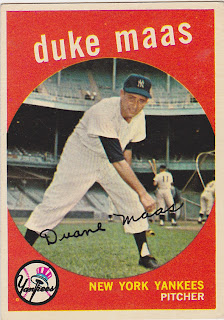 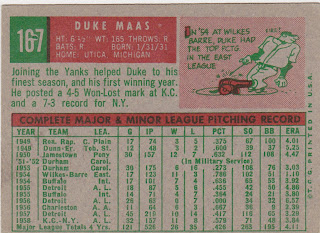 Ring...ring...ring..."Good Morning, Kansas City Athletics, Mr. Selkirk's office. How can I help you?"

"Hello, Marge? George Weiss of the Yankees here. Is Selkirk in?"

"No, Mr. Weiss, but he told me to give you anything you wanted, just like he always does."

"Sounds great, Marge, we need a pitcher or two. Send me Duke Maas."

"Sure thing Mr. Weiss. Would you like Virgil Trucks, too? I just saw him walk past."

"Sounds good, Marge. I'll send something your way. Won't be much but they'll be breathing, probably. My best to Ol' Selkirk. Always nice ripping...err...doing business with the A's!"

And so it went through the 50's.The Yanks needed to fill a hole, the A's obliged. In 1958 it was Duke Maas.  He was coming off a couple of double digit win seasons for the Tigers, had settled in with some nice numbers for the punch-less A's and then, bingo, off he went to the Yanks to help them in their drive to the American League pennant in 1958.

Actually I thought Duke Maas had a really reat name. And any card that shows off the various decks of Yankee Stadium (including my frequent upper deck perch) qualifies as cool. That's Jerry Lumpe (#11) in the background waiting for his BP cuts. (Lumpe rode the KC/NY Express the other way when the Yanks brought over Hector Lopez and Ralph Terry in 1959.)

After minor league and military duty (in Korea) Maas broke in with the Tigers in 1954. He was dealt to KC in '58 and ended up on the Yanks. He pitched in two World Series with New York.

His best year, at least record-wise, came in 1959 with the Yanks when he went 14-8. He was drafted by the Angels in the December 1960 expansion draft but traded back to the Yanks for the '61 season which he spent nearly all of in the minors before he hung it up.