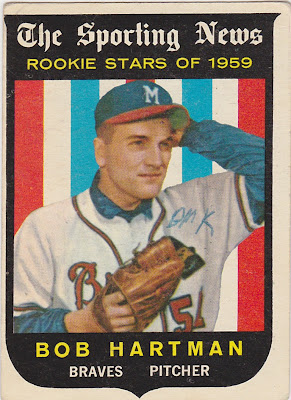 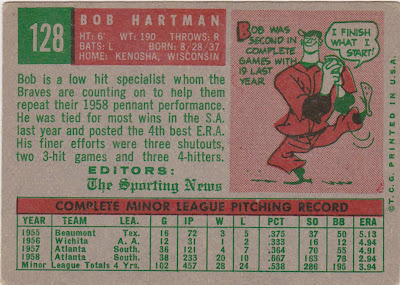 Bob Hartman had two Rookie Star cards, the featured one and another the following season in the 1960 set, pictured below. That's two more cards than he had wins in the majors. He played parts of two seasons in the bigs. In '59 he made three appearances for the Braves and, after being dealt to Cleveland, pitched in 8 games for the Indians in 1962. He lost his only decision but he should have had a win in his first start that year.

On June 26 in Detroit in the second game of a twin bill Hartman got the ball and went 10 very strong innings. He allowed only a run on three hits while fanning 7 Tigers. The only run he allowed was a homer in the bottom of the first by Bubba Morton. Meanwhile the Tribe was banging out hits but couldn't push across more than a single run. Hartman was lifted for a pinch hitter in the eleventh and the Indians finally took the game in 12, winning for Gary Bell in relief. Five days later Hartman got another start aginst the White Sox and was KO'd early, taking the loss. After six more relief appearances in July he was off to the minors where he played a few more seasons.

But Topps can't be faulted for giving him a Rookie Star card in 1959. He was a 20 game winner for the Braves' Atlanta farm club in 1958. Baseball Digest had a feature story on him that season. Hartman appeared to have a bright future. Just wasn't to be.

After more minor league work in the early 60's Hartman retired to Kenosha, Wisconsin and was a youth baseball official. He passed away in 2010.

My copy of this one is pretty weak with soft corners and a kid's initials printed on the front. I've got a few cards from this same kid's collection, all with his initials (I guess they are initials, could be a code). Since I'm not a big fan of these Rookie Cards this will end up being one of my last 'upgrades', if I bother at all. No disrespect to Bob Hartman intended. 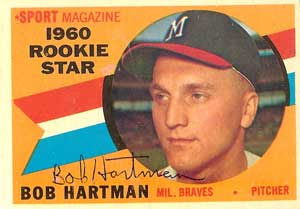 Posted by Commishbob at 5:37 AM