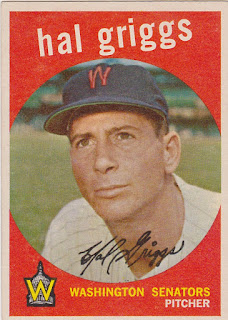 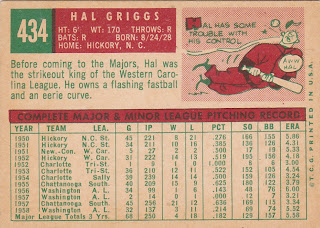 I looked at this card of Senators' pitcher Hal Griggs and I immediately thought: "What am I going to do with it? Another long time minor leaguer with horrific big league numbers for a lousy club. So he looks like someone I know who I can't seem to recall. Gonna be a dull post about a dull guy wearing a dull cap on a dull card."
Wrong. I found this Sports Illustrated Vault article from 1993 and, well, sometimes this stuff just writes itself. And since I've had a really hard time getting the link to load for the past couple of days I'm going to break a rule of mine and probably half a dozen copy-write laws and paste it here for your enjoyment:

Has anyone seen Hal Griggs?
Harold Lloyd Griggs, righthanded pitcher...6 feet, 170 pounds...born Shannon, Ga., Aug. 24, 1928...was 6-26 with a 5.50 ERA from 1956 to '59 for the Washington Senators...lasted four seasons with the Senators because his arm was live and the Washington pitching staff was terrible...after '59 pitched in minors for four seasons...enjoyed the nightlife...once told Senator teammate Ken Aspromonte, "I'm only going to be here once on this earth, and I'm really going to live it up."...
Hal Griggs has vanished. O.K., he hasn't exactly vanished—he has escaped the clutches of baseball's history buffs and autograph hunters, which is about the same thing. Griggs is on the very short MAA (Missing After Action) list of Jack Smalling, an insurance salesman and signature sleuth from Ames, Iowa, who has been a co-author of The Sport Americana Baseball Address List for the last 13 years.
Smalling first began tracking Griggs in August 1974 and since then has sent a dozen letters to mayors and newspapers in towns where Griggs supposedly lived, to phantom addresses in those towns and to Griggs's family. In December 1982 Smalling received a reply from Griggs himself; the return address was in Tucson. But Smalling's subsequent missives got no response, and in 1992 one of Griggs's children told Smalling that even he didn't know where his father was.
...decided to give pro ball a shot in 1950 after serving in the Coast Guard... on June 20, 1952, was wed on the mound before a Western Carolina-league game in Hickory, N.C. ...when asked why he chose that site for his wedding, he said, "I couldn't hit, so there was no sense getting married at home plate."...
Smalling has found several hundred ex-ballplayers over the years. Of Griggs he says, "Some of these guys don't want to be found, and so they aren't." Until last year pitcher Joey Jay had made himself scarce for two decades. Jay, who was the first Little Leaguer ever to make the major leagues and a two-time 20-game winner for the Cincinnati Reds in the early 1960s, retired in 1966 and faded from view in the mid-'70s. Autograph seekers placed him at the top of their most-wanted list. It was rumored that he was in the federal witness protection program. Jay was finally found last year, by autograph hounds, in Tampa. After years of denying it, Jay confessed that he was indeed their man.
...during the '50s Griggs gave up hunting and took up golf because he said he felt sorry for birds and rabbits...in an intersection of the two most divergent career arcs in baseball history, he ended Red Sox slugger Ted Williams's record streak of 16 consecutive times on base by inducing Williams to ground out on Sept. 24, 1957...once lost 18 straight minor league games...once won sewn straight minor league games, after which he said, "Can yon imagine what would have happened if I had been able to do that in the big leagues? I would have been in tall cotton."...
Our request to interview Griggs, sent to him through Major League Baseball Players Alumni, has gone unanswered.

"I couldn't hit, so there was no sense getting married at home plate." Now THAT'S a great line. Seems to me that Hal Griggs wasn't so dull after all. Quite the life of the party it seems. How did he miss hooking on with the Copacabana Club boys on the Yankees of that era?
Just to add a bit to what the SI article said... Griggs spent four seasons in the high minors after his last big league game, hoping for another taste of the bright lights no doubt. Baseball Reference's Bullpen page reports that after his career Griggs was employed in sales positions, building maintenance and construction in Florida, Michigan and Arizona. He retired in Arizona and died in May of 2005 in Tucson.I have no idea if he ever came out of hiding and found a place in Smalling's book after the article was printed.
It's still a pretty routine card, though. Not in bad shape, pretty nice actually. I just find a portrait of a guy in that uninspired Nats cap kind of 'meh'. I don't find much to like in the club's logo either. Oh well.
Posted by Commishbob at 6:08 AM