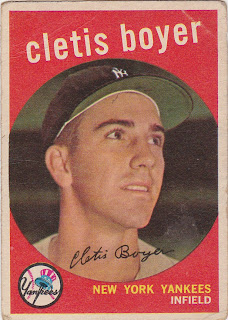 I saw a lot of Clete Boyer when he was active. He was the Yankees' third baseman when I was living up there and attending games at the Stadium. He was traded to the Braves at the same time I was moving to Houston. The first friend I made was a Braves fan so we went to quite a few of their games in the Dome in '67 and '68.
I never heard anyone call him 'Cletis' except for possibly Red Barber. Anyway, Boyer a 'good field/good hit' third baseman for the Yankees and Braves through the decade of the 60's. He arrived in New York via the well established 'Kansas City to New York Express' in 1958. Seems like when the Yanks called, the A's always answered the phone.
Boyer, a Missouri native, never hit for a high average but he had good power and after coming over to the Braves in 1967 he had a career high 26 dingers. For the Yanks he was usually good for double digit homer totals and he anchored a pretty solid infield along side Tony Kubek, Bobby Richardson and Moose Skowron or Joe Pepitone.
As good as he was in the field he only won one Gold Glove, that coming in the NL in 1969. Playing in the same league as Brooks Robinson and then Ron Santo will do that.
There were three Boyers in the big leagues. Clete, his well known (and very accomplished) brother Ken, and Cloyd who was a teammate of Clete when he was ending his pitching career with the A's in 1955. Cloyd and Ken were both property of the Cardinals in the early 50s but Ken was serving in the military and missed the chance to share the field with Cloyd.
Clete played on five straight Yankee pennant winners from 1960 thru 1964, winning two tiles. He and Ken were the opposing third basemen in the 1964 Series won by the Cards.In the seventh game Clete and Ken became the only brothers to ever homer in the same World Series contest. Clete got another taste of the postseason as a Brave in the 1969 playoffs when his club lost to the Amazin' Mets.
Clete Boyer died in 2007. Nice interview from 2004 with him right here.
Boyer's first Topps rookie card was in the '57 set (his 'rookie' card is a 1955 Bowman). He was a member of the Athletics and the shot was taken at Yankee Stadium. Since the '59 Boyer is an early series card the picture is likely from the same time. (Hard to fool me, yes?) Anyway the point is that Topps wanted to show Boyer as a Yankee and they airbrushed the NY onto his cap. Poorly. It's too small. No doubt they wanted to have it visible but it would have been better to just add the part that would have actually been seen from the angle of the shot.
What IS seen from that (or any) angle is that my Boyer isn't one of the better cards in my '59 set. It's one of the few creased examples I haven't tried to upgrade yet. One of these days I'll get to it.
1957 Topps Clete Boyer: 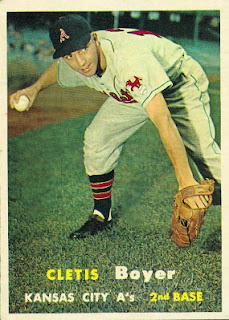 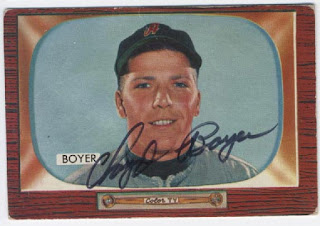 Posted by Commishbob at 8:27 AM