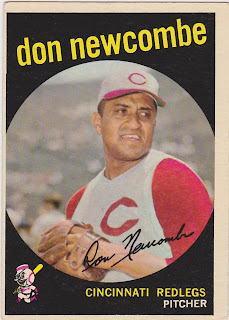 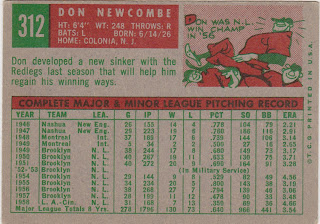 First things first.... I love this card. I'm partial to the black border cards in this set and this is one of the better ones. Newk's red and white uni just looks good here. More on the uni in a bit.

Don Newcombe began his career with the Newark Eagles in the Negro Leagues as a youngster in 1944. After signing with the Dodgers he pitched pretty impressively in their chain with Nashua and Montreal before debuting with the big club in 1949. And an impressive debut it was. Newk went 17-8 with 5 shutouts, made the All Star team and collected Rookie of the Year honors.

And he only got better winning 98 games in the next five seasons. He did that wrapping those five seasons around a two year stint in the military. His best year was 1956 when he won 27 games, lost only 7, had a WHiP below 1.0 and took home the Cy Young and MVP trophies. That makes him the only pitcher until Justin Verlander to have won the three most prestigious trophies in his career.

Although he never did win a World Series game himself, his Dodgers were in the Series three times and took the 1955 Series from the Yankees.

Newcombe was traded to the Reds in June of 1958. He stayed in their rotation (and bullpen at times) until he was purchased by the Indians in June of 1960. He spent '61 with the Indians' top farm club and then pitched in Japan in 1962. In 1970 he joined the Dodgers front office and has served in several capacities ever since. The Los Angeles Times spoke to Newcombe following the recent news that the club had a new ownership group with Magic Johnson as part of it. Newk was very happy with the deal.

The photo on this card was taken in the LA Coliseum based on the tall sloping stands in the background. Newcombe was traded to the Reds in 1958 so it's possible that the photo was taken during one of the Reds' two trips to the West Coast following the trade. But it's also possible that the shot is airbrushed, something Topps did a lot of back then. If it is airbrushed it's one of their better jobs. I blew the card up and can't tell one way or another. Doesn't matter I guess. The card looks terrific anyway. It's a little worse for wear with being off center and having some soft corners but no matter. It's one of my favorites in the '59 set.

Posted by Commishbob at 1:49 PM