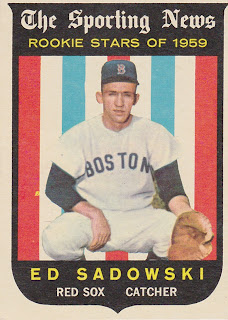 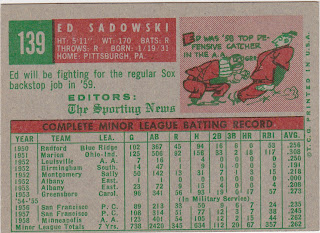 The back of Ed Sadowski's Rookie Stars card claims he'd be fighting for the regular catcher's job with the Red Sox. Fact is that Ed didn't get that chance and was in the minors in 1959. He made the Sox roster in 1960, got about 100 plate appearances, had more minor league time and was lost to the fledgling Los Angeles Angels in the expansion draft for the '61 season.

The Pittsburgh native spent three years as a part timer with the Angels, revisited the buses in the minors, was traded to the Braves and finally finished up with a 1966 'cup of coffee' in Atlanta in 1966.

Ed comes from a baseball family. His two brothers, Bob and Ted, were major leaguers in the '60s and his nephew, Jim played for the Pirates in 1974.

Topps did Ed Sadowski no favors with the way they cropped his photo for the '59 card. Looks like they airbrushed his hat, and chopped the side of his head. Makes him look like Frankenstein. They reused the picture for his 1960 card. This time they used the background (is that a minor league park?). 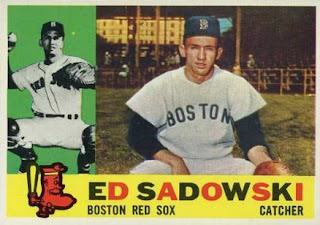 He's half the catching duo on the 1964 'Angel Backstop' card. There is a certain charm to a pair of squatting catchers, and Bob 'Buck' Rodgers had a nice career as an Angel player, manager and broadcaster. But Ed Sadowski was back in the minors when this card was issued and never appeared in an Angel uni again. 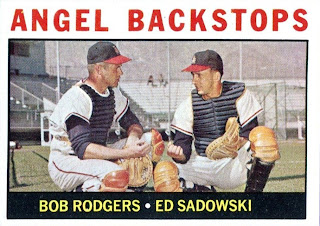