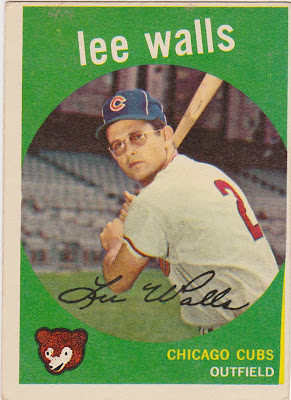 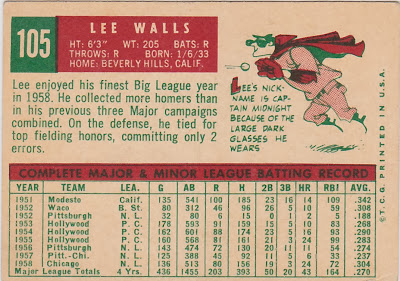 Lee Walls was a high school phenom as a pitcher in California and he caught the eye of Pittsburgh GM Branch Rickey. Walls was also an outfielder with hitting skills and that is what interested Rickey. After signing with the Pirates in 1951 as an 18 year old Lee Walls spent a productive year in the lower minors and opened the 1952 season as a major league outfielder. But a slow start sent Walls back for more seasoning and it wasn't until 1956 that he returned to the bigs.

And when he did come back it was with a nice season hitting .274 with 11 homers and 54 RBI. About a month into the '57 season he was dealt to the Cubs. His '57 numbers were below the previous season but he peaked in 1958 and represented the Cubs on the NL All Star squad and got into the games as a pinch hitter and played left field. His season of 18 doubles, 24 homers, 72 RBI, and .304 average were all career highs.

Walls never again approached his 1958 totals but he did remain a regular for a year or so and than as a part time outfielder and pinch hitter for the Reds, Phils and Dodgers. He was gone from the majors after 1964 but he played a season in Japan before returning stateside to manager in the minor leagues.

One note of interest is that Walls was the 22nd and final player selected by the Mets in the expansion draft of 1961 but he was traded to the Dodgers (along with $100,000) for Charlie Neal two month later.

Topps had a handful of capless Walls pictures and used them for several years. 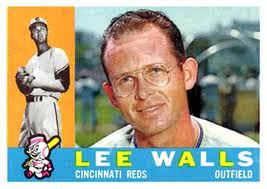 1961 Topps, Walls in Pirates gear(?) on a Reds card. Hard to say if the piping is Cubs' red and blue or Pirates gold and black. 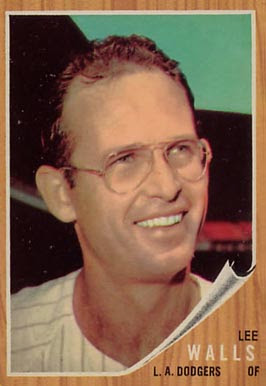 Above and below are his two issued 1962 Topps cards. The photo above seems to have been taken at Connie Mack Stadium and the pinstripes on Walls' jersey colored gray to hide the Phillies' red ones.

This second '62 uses the same picture as the '61 and I'm leaning towards Cubs' colors on his color. 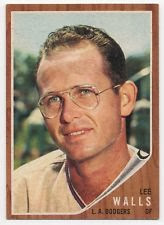 Third time is a charm for this shot as it appears on his '63 cards. Now I'm pretty certain the picture is one that was taken during his days in Chicago. 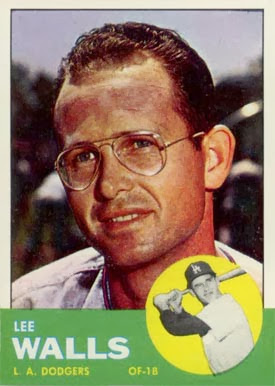