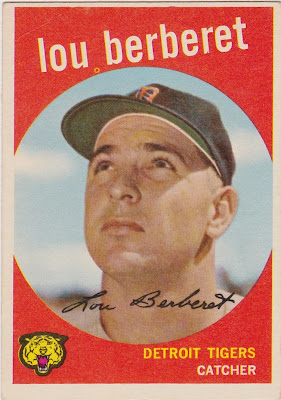 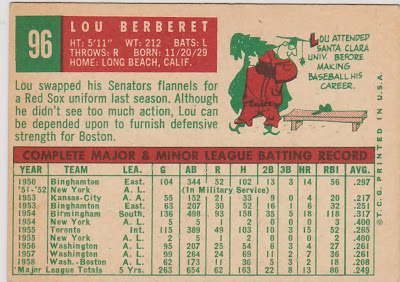 Lou Berberet was a two sport athlete at Santa Clara University for two years before he accepted an offer from the New York Yankees in 1950. After  productive 1951 season in the minors he spent two years in the military and then returned to pro ball. The Yankees had Yogi Berra behind the plate in those days and Casey Stengel favorite Charlie Silvera backing him up, so Berberet's chances of getting much playing time with the Yanks were slim to none.

He did get a couple of looks though. He got ten at bats spread out over 1954 and '55 and picked up 4 hits giving him a career .400 average in pinstripes. According to his son Tom, Lou Berberet was playfully proud of that accomplishment.

Traded to the Senators (the Athletics must have had a bunch of Yankee reject catchers already) for 1956 Berberet played as more or less the Nats regular catcher for a couple of seasons. He had some notable defensive accomplishments as a catcher. He made just one error in 460+ innings behind the plate in 1956. Just to prove that was no fluke he bettered that mark the next season by having a flawless year in over 600 inning over 70 games. In '56 and '59 he led the AL in caught stealing percentage.

He was traded to Boston in May of '58 and then spent the final two years of his career with the Tigers. After retirement he worked for many years managing liquor distributorships in California and Nevada. His Baseball Reference Bullpen page chips in with a couple of humorous stories from his playing days:

Longtime Washington Senators announcer Bob Wolff tells of the time Berberet, the team's catcher, settled under a pop fly, threw away the glove and attempted to make the catch with his mask but never touched the ball.In another instance, he was catching and chewing a chaw of tobacco when a player came down the line and collided with him. Berberet swallowed the tobacco and almost choked. He had to be revived on the field.

Looks to be an altered cap logo on this card. Could be that a Red Sox logo was finagled to resemble the Tigers' "D" or a Senators logo was wiped out and the "D" drawn form scratch. Ahhh. life's little mysteries. 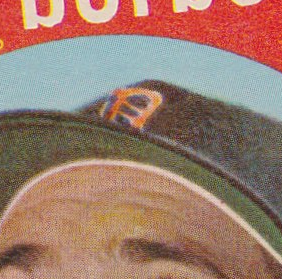 btw... this is the last card from the '59 Topps checklist numbered below 100 to be featured. That's if I haven't screwed up someplace.