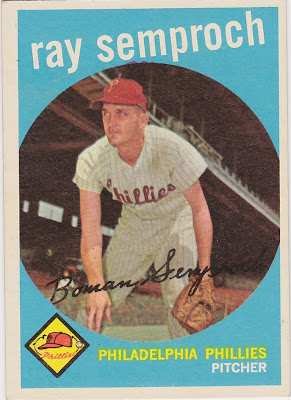 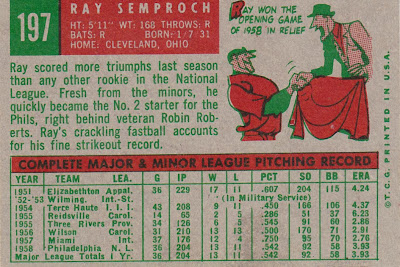 Cleveland native Ray Semproch signed with the Phillies in 1951 and won 17 games in the lower minors that season before he spent the next two years in the military. Returning to baseball in 1954 he worked his way to the majors with four more seasons of minor league ball. Interestingly his 1957 season at AAA was far better than any previous year he spent at a lower level. I came across a few pages in a book on Google that tells of a heroic pitching effort Semproch delivered in the International League championship series in 1956 for Miami.

He earned himself a job in the Phils' rotation in 1958 and he went 13-11. At one point he was 13-6 and his 11 wins at mid-season led the league. A look at his game logs for '58 show that he mixed some really nice starts with some real stinkers. That win total was second only to Robin Roberts on the Phillies' staff and is made even more special when you compare it to the teams' 69-85 season record.

Semproch never again approached the success he had as a rookie. He went 3-9 in 1959 and was then traded to the Tigers. He won three games in relief in Detroit in 1960 but was traded to the Dodgers in mid-season and was farmed out.

He was drafted by Washington in December of '60 thus becoming one of the first players acquired by the 'new' version of the Senators but was sold to the equally new Angels in April of '61. He pitched only twice for the Angels, spent most of the year in the minors, and then retired.

He worked in his brother's Italian restaurant after that. Semproch's first Topps card came in 1958. On it he is listed by his given name of 'Roman'. 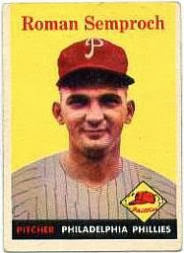 His nickname was 'Baby". I have no idea why.
Posted by Commishbob at 6:30 AM