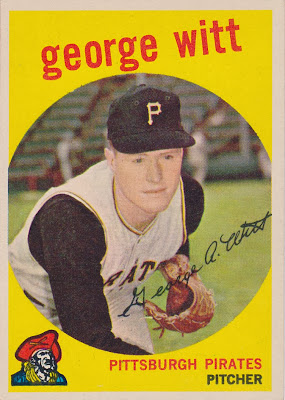 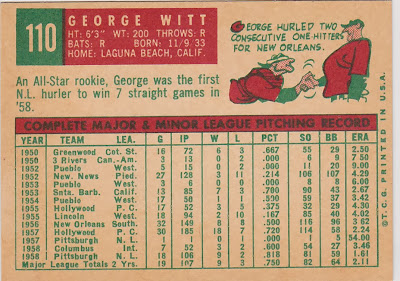 George 'Red' Witt took seven minor league seasons and a year in the service after signing with the Dodgers in 1950 to make it to the big leagues. When he got there on September 21 of 1957 with the Pirates he was treated pretty harshly. That day he got a start against the New York Giants at Forbes Field and he didn't make it past the second inning. He was shelled for six earned runs in an inning and a third.

But in the spring of 1958 he was ready and that season he went 9-2 with a sterling 1.82 ERA and he had three shutouts among his five complete games in 15 starts. He had two wins over the Champion Milwaukee Braves one was a two hitter and the other a ten inning shutout. His 1959 season sadly saw a reversal in his fortunes as he went 0-7 due in large part to elbow issues. In fact Witt won only two more games over the course of the next three partial seasons he spent in the majors in Pittsburgh as well as stops with the Angels and Colt 45s.

But Witt did win a ring with the 1960 Pirates. In fact he was the only one of the ten pitchers used by the Bucs who did not give up an earned run in the World Series. He was out of baseball after a 1963 season spent in the minors and he went on to earn a Masters of Education at Cal State-Long Beach and had a long teaching and coaching career at Tustin High School in California. After he retired from that noble profession he pursued an amateur singing career with various Christian groups.

George Witt died earlier this year at the age of 81. Certainly for him a life well led.

Here is a tribute to him played at his services I found on YouTube: