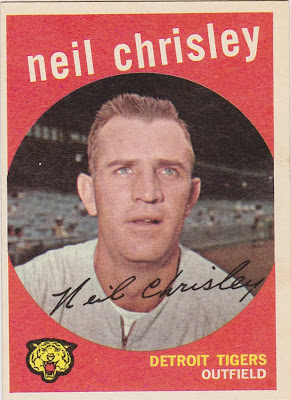 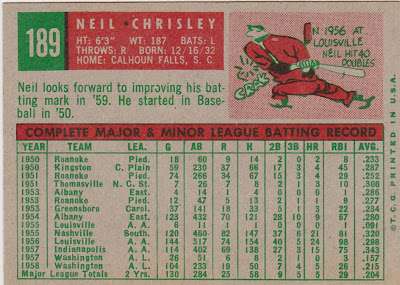 Here we have another of those multi-sport stars, Neil Chrisley. At Newberry College he played baseball and basketball. He was drafted by the Red Sox in 1950 and spent five years in the minors and two in the military before making his debut in the majors with the Washington Senators in 1957.

The left handed hitting outfielder spent the '58 season in Washington where he hit just .215 in part-time duty and was traded to the Tigers. He was again a part-timer in Detroit but he did manage to put together a decent season in 1960 hitting five homers while batting .255 in nearly a hundred games. His most memorable week came in May of that year when he had the only hit, a first inning double, off Bill Monbouquette in a one-hitter by the Red Sox hurler. A week later he had his only career two homer game.

He was traded to the Braves and played very little in 1961 and was sold to the fledgling New York Mets that October. The Mets returned Chrisley to the Braves on the eve of Opening Day. The Braves farmed him out and he never returned to the majors. He retired to become an insurance salesman in 1964.

Chrisley, whose given name was Barbra, passed away earlier this year in his native South Carolina.