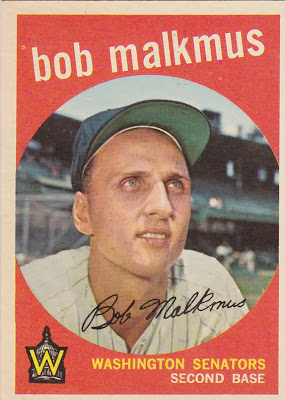 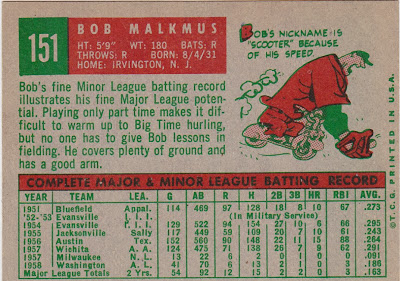 Infielder Bob Malkmus came out of New Jersey (not far from where I grew up, btw) and played in 268 major league games spread over parts of six seasons in the majors. Oddly his very best season, the only one in which he was a regular, was his last full year, 1961 with the Phillies. That season accounted for nearly half his appearances and well over half his big league at bats.

Malkmus originally signed with the Braves in 1951 and took the long six year tour of their farm systen before he got into a handful of 1957 games with the big club. He was traded to the Nats prior to the '58 campaign and got into about 40 games. He had a solid season in Denver with the Nats' AAA club in 1959 hitting .300 and earned his way back to the majors via the Rule V draft courtesy of the Phils.

But he was back in the minors in 1962 despite that previously mentioned 1961 season and he finished out his career with five more seasons in the Phillies' chain. That 1961 year, in which he hit .231, garnered him 22nd place in the League MVP voting. Here is an article from the Spokane newspaper of 1965 that mentions some of his minor league exploits.

After he retired as an active player he managed for nine seasons in the minors and then went into private business. He returned to baseball as a scout for the Indians and Giants. He is a shot of him from 2011. He's the guy in the red and white Phillies cap. 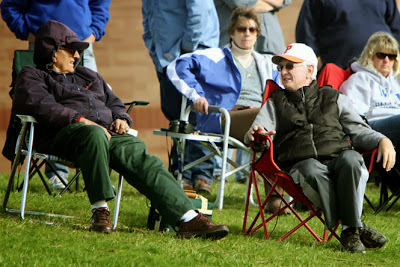 Malkmus is wearing pinstripes on this card and his hat is tilted so as to hide the logo. My conclusion is that he is wearing his Senators uni in Griffith Stadium. It's one of those times that Topps used the 'hide the logos he might get dealt' photo when the player was actually on the correct team.