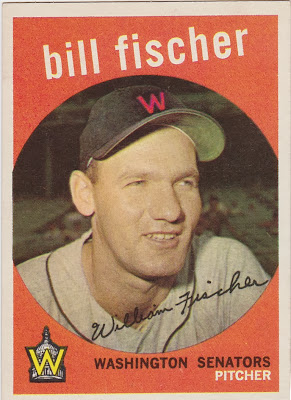 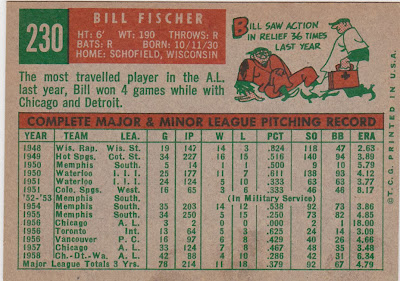 Look up the term 'baseball lifer' and you are likely to see a picture of Dom Zimmer or, just maybe, Bill Fischer. He was just 17 when the Chicago White Sox inked him to a pro deal out of Wisconsin and the righthander debuted as a pro with a 14-3 record in 19 starts the low minors.

He moved up the Sox' chain, spent two years in the military, pitched in the independent PCL, was re-acquired by Chicago and finally debuted with the White Sox in 1956. He made three appearances that season before being returned to the minors and then he was back in the bigs in 1957.

Over the course of the next nine seasons he pitched for four different organizations, mostly out of the bullpen but he was a part of the Washington Senators' rotation in '59 and then into 1960 before he was traded to Detroit for the second time in his career. That appears to be a Tigers' uni he's wearing in this card's picture with a drawn-in 'W' on the cap.

His career mark over those nine seasons with the Senators/Twins, Athletics, White Sox and Tigers was 45-58 with two shutouts and 13 saves. In 1962 with Kansas City he set a major league record by pitching 84 1/3 consecutive innings without a walk, a record that still stands.

From 1965 through 1968 he pitched in the White Sox chain at the AAA level and had really good numbers each of those seasons but he never again appeared in a major league game. That doesn't mean he never wore a major league uniform however.

His Baseball Reference Bullpen page gives a good account of Fischer's coaching odyssey which followed his days on the mound:


After his playing days, Fischer was a minor league pitching coach for the Kansas City Royals from 1975 to 1978, a Cincinnati Reds coach from 1979 to 1983, a minor league coach for the Royals again in 1984, and a member of the Boston Red Sox staff from 1985 to 1991. He worked in the Atlanta Braves chain from 1992 to 1999 and then was Tampa Bay Devil Rays pitching coach in 2000 and 2001. He returned to Atlanta for the period from 2002 to 2006. He has worked in the Kansas City Royals organization since 2007, serving as their Minor League Pitching Coordinator in 2009 and more recently as a Senior Pitching Advisor.


Fischer was the pitching coach for Roger Clemens when the then Red Sox ace won three of his Cy Young awards. Only Leo Mazzone, Dave Duncan and George Bamberger have coached more Cy Young winners. A year ago, according to this page on the KC Royals' site, Fischer even stepped back into his active coaching role, even if only as a fill-in for a couple of games. So since 1948, with a couple of years away serving his country, Bill Fischer has been associated with baseball. That's a 65 year stretch. That's a 'baseball life'!.
Posted by Commishbob at 6:00 AM