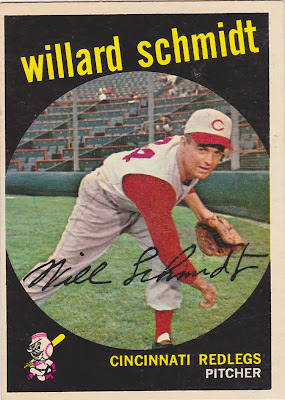 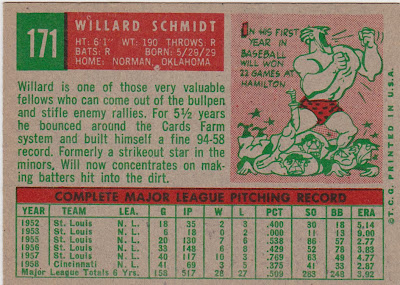 Willard Schmidt has a great card, doesn't he?. The back frame that contrasts and compliments those Reds' duds, Seals Stadium with the distinctive red railings and, maybe best of all, a terrific cartoon on the reverse. It became even greater as I researched his career as you will see.

Schmidt was signed out of Hays, Kansas in 1949 by the Cardinals. He won 56 games in three seasons as he climbed through the Cards' well stocked farm system. He got brief looks in St. Louis in 1952 and '53 but was back in the minors for the following season and a half where he again was impressive. He won 30 games over that span and was recalled to the Majors by the Cards in July of '55, this time for good.

He was primarily a starter for that '55 season and continued in that role in 1956. He posted impressive numbers, especially in his rookie campaign. That half year he went 7-6 with a 2.86 ERA and a 1.13 WHIP. He had some memorable games among his fifteen starts. His first start resulted in a four hit complete game win over the Giants in New York. Ten days later he nearly matched that with a five hit win over the Pirates at home.

On August 11th he took a no-hitter into the seventh against the Braves in Milwaukee. Johnny Logan singled to end the no hit bid but Schmidt breezed through the rest of the game for the shutout win. On September 4th he took a perfect game into the 7th before the Cubs got to him and tagged him for a loss. Finally, on September 21, in what turned out to be his final start of the season, he went 12 and a third against Cubs at home. He had allowed just seven hits and three runs going into the 13th but the Cubs rocked him and he took a 7-4 loss. Hard to envision that game given the changes that have taken place in baseball since then. Twelve and a third innings is probably two games work for many of the games starters these days.

His 1956 numbers were not quite up to those of his rookie season and in '57 he was converted to a reliever. He went 10-3 but his hits per inning went way up and the Cards had younger prospects on the rise. After that year he was traded to the Reds in the deal that brought Curt Flood to St. Louis. In '58/'59 he won six games and then found himself back in the minors to close out his career.

Before he was done though he was able to grab a bit of notoriety by becoming the first player in major league history to get hit by a pitch twice in the same inning by two different pitchers when Bob Rush and Lew Burdette of the Milwaukee Braves hit him in the third inning of a wild and crazy 11–10 Reds win on April 26th of 1959. From the box score it appears he took a shot off the bat of his old nemesis Johnny Logan that KO'd him.

After his retirement he co-owned Schmidt-Tullius Dodge and Schmidt Bicycle and Lawnmower Center in the Norman, Oklahoma area and later retired from that to a small farm in Newcastle, Oklahoma. His 2007 obituary states he had been preceded in death by six brothers and three sisters and survived by two other sisters, that his family had been among the first German-Russian settlers in the Hays, Kansas area and that his first language was German. He also attended Fort Hays College for a year before turning to pro baseball.

In the process of researching Willard Schmidt I came across a blog written by his great nephew, James Schmidt. James, a chemist by trade, is a Civil War historian and author who specializes in the art/science of medicine during that remarkable time. As a Abe Lincoln-phile I immediately had my interest piqued and then I was really pleased to find that James lives right here in Houston and does lectures and discussions on his interests and books. In fact I missed one held by the Houston Public Library by just a week or so. Fascinating stuff.

I had found a post on his blog centered on great-uncle Willard and I reached out to James and he was kind enough to respond and point me to another post and he filled in a bit of his family background. How great is that? I'm looking forward to meeting James Schmidt one of these days and hearing more about his great uncle and especially more about his field of interest, the Civil War.

Oh, that cartoon on the back of Willard Schmidt's '59 Topps?  Behold this classic: 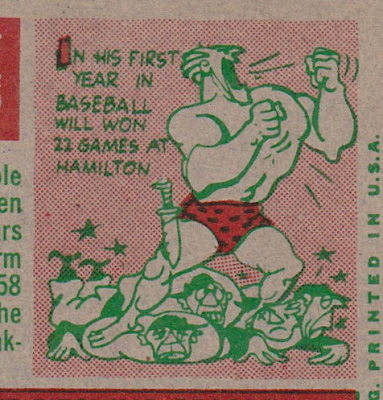