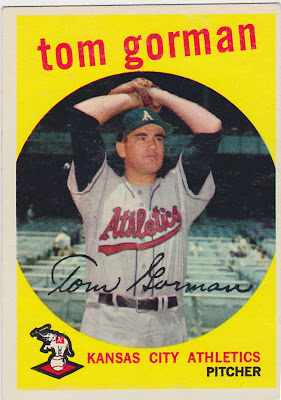 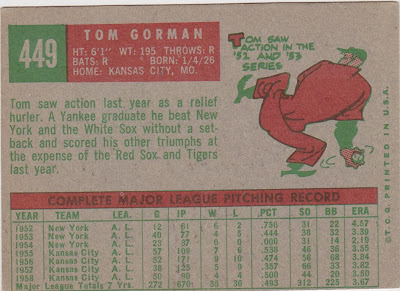 Tom Gorman began his professional career was a Yankees prospect who they drafted in 1946 after he had been in the Navy serving in the Pacific in WWII. He was more or less a local kid having been born and raised in Valley Stream on Long Island.

He pitched erratically in the Yankees' chain but got a call mid season in 1952. He made six starts with an equal number of bullpen outings and went 6-2. He made an appearance in the World Series that year against the Dodgers getting into the Game Three in the ninth inning after Eddie Lopat had allowed the deciding runs in the loss.

The next season he pitched in 40 games for the Bombers, all but one in relief and posted six saves which was good for ninth best in the A.L. He made another World Series appearance and earned his second ring. In that Series he pitched three innings in relief of White Ford in Game Four and struck out the first batter he faces, Brooklyn's Billy Cox. Gorman allowed a run in that outing and even came up to hit once and whiffed.

He pitched for the Yanks up until July of the '54 season when he was farmed out despite decent numbers. I can't find out anything more but I suspect he was blocking the progression of a younger arm. Tom Morgan perhaps?

Either way the Yanks traded him to Kansas City in the off season (Another deal with K.C.? Shocking!). Gorman pitched for the Athletics for four full seasons and part of a fifth. 1955 was his busiest and best year. He collected a career high 18 saves which translated to second among AL bullpen guys. He was a spot starter for the A's in '56 and '57, went back to the pen full time in 1958 and was washed out of the big leagues early the next season.

Gorman died in Valley Stream in 1992. He is not related to umpire Tom Gorman who worked in the NL for nearly three decades or to the Tom Gorman who pitched for several NL clubs in the 1980s.

I've always liked his 1953 Bowman. Anyone out there collect these? I'd love to swap for some of your dupes. 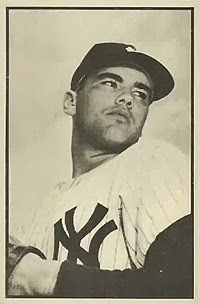