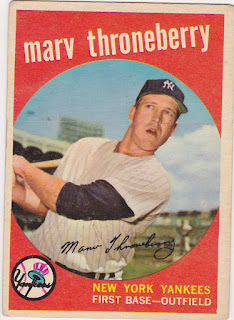 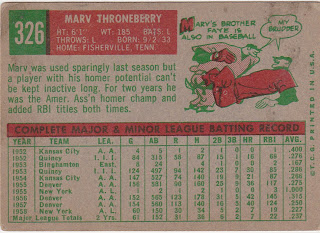 My memories of Marv Throneberry are as an object of derision during and after his end-of-career run with the horrific expansion Mets. What Mario Mendoza was to the 70's, Throneberry was to the 60s, at least among the kids I hung with. And it really was an unfair assessment. I mean a .237 average with fifty some homers is a tidy little career nest-egg, no? He hit 16 in 1962 when the Mets played in the spacious (except for the foul lines) Polo Grounds.
Marv's reputation as a bad ballplayer, combined with his good-natured ability to laugh at himself, led to some Miller Lite commercials that put him in the spotlight more than he ever was in his playing days.
A Yankee signee he made a one game appearance in 1955 but actually broke in with the '58 team after putting up some impressive power numbers in the minors. He was AA MVP in 1956 and hit over 80 homers in a two year span in Denver's thin air. But, like most Yankees who couldn't budge the regular out of the lineup (Hi, Moose!), he traveled the highway out to Kansas City for a bit beginning in 1960. From there it was on to Baltimore and finally a trade to the Mets early in the 1962 season. He finally had a regular gig and played better than you'd expect from a guy who became the butt of baseball humor, hitting .244 and collecting 49 RBIs.
Marv's older brother Faye Throneberry played for the Nats and a couple of other clubs through the 50s. Faye has a card in this set as well. It's unknown if Marv lorded his .237 career average over Faye's .236 at family get-togethers. Or the fact that he had an at bat in the 1958 World Series. OK, so he whiffed against Lew Burdette in Game Two. That's one more AB than Faye ever got in a Series. And Marv had a World Series ring to flash around.
Here are a couple of post-career looks at Marv. Neither is very high quality but they are worth linking. First his Miller beer ad....
...and then a feature done about him on the CBS Sunday Morning show.
Pretty nice card, too. The red frame, classic Yankee duds and unusual pose against the blue sky and YS facade make this card stand out. Good for you. Marv. Who's laughing now?
Posted by Commishbob at 5:02 AM