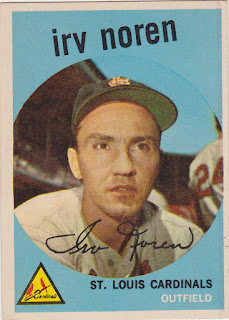 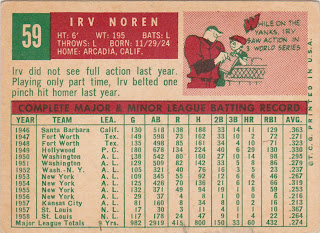 It's pretty easy to overlook Irv Noren but he had a nice little run in the early fifties on some very good Yankee clubs. He'd gotten to New York via a 1952 trade with the Washington Senators. Talk about going from the outhouse to the penthouse.

In New York he played both in the outfield and at first. He was part of a platoon system used by Casey Stengel and got enough at bats and played well enough to make the 1954 All Star team. In that game he spelled Ted Williams in left for the ninth inning in an AL 11-9 win. Another perk of being a Yankee of course is getting a taste of the post-season. Noren played in three Series', all against the Dodgers and won rings in '52 and '52. He went 3 for 10 in that 1952 Series.

Noren was originally a Dodger signee but had his progression up the chain blocked by the wealth of talent owned by Brooklyn. And he ended his time with the Yanks in 1957 with a time honored 1950s tradition, he hung up a call from George Weiss and bought a bus ticket to Kansas City.

Noren never approached the quality of his 1954 play and kicked around from the A's to the Cards, Cubs and finally the Dodgers, back where he had started. He retired after the 1960 season and went on to manage in the minors and coach in the bigs. He served as player manager for a couple of years and even did some pitching for Hawaii of the PCL in 1961 and 1962. He was on the staff of the A's when they had their Series run in the early 70s.

Interestingly Noren is the third player to appear here recently who also had a pro basketball career 'on the side.' Noren played with George Mikan for the NBL's Chicago Gears in 1946/47. They won that leagues (a forerunner of the NBA) title that season.

Pretty routine card here for Noren. Nothing stands out. Depending on when the shot was taken that #24 behind Noren could be Gene Freese, Chuck Harmon, Gene Green or Benny Valenzuela. They all wore that number during 1957/58 for St. Louis. I'm not sure why I even bothered to look that up.
Posted by Commishbob at 6:15 AM