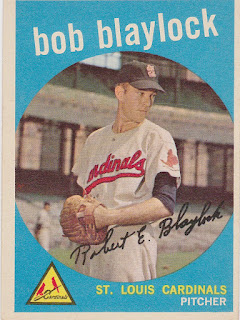 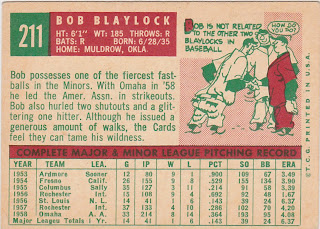 Bob Blaylock was a Cardinal signee in 1953 after high school. He was a hard throwing righty and had some impressive numbers at times in the minors. He got a 1956 whirl with the Cardinals and went 1-6. That led to another stint in the minors.

Blaylock pitched the last of his 17 major league games in 1959. He started a September game against the Cubs after two other relief appearances and was beaten. He never returned to the majors, retiring prior to the 1963 season. His career numbers include a 1-7 record and a 5.94 ERA.

Blaylock owned and operated a motel after his playing days. There were three Blaylocks in the National League in the 50s. They were not related although Gary Blaylock also played on the Cardinals in '59 they were there at different times of the season. His name is a link to his card in this set. Marv Blaylock was an first baseman/outfielder for the Giants and Phils in mid-decade. He appeared in a couple of Topps sets, the last being 1957. Bob Blaylock did have a couple of grandsons, Justin Beal and Josh Beal that played minor league ball in the recent past.
Blaylock's card is nicer than his career. Always like the Polo Grounds in the background and Blaylock is wearing the mid '50s Cardinal road jersey that does not show off the iconic 'birds on a bat'.
Posted by Commishbob at 6:32 AM