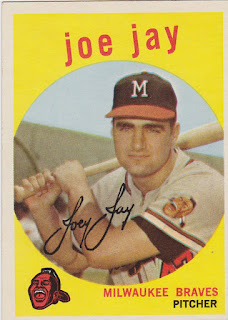 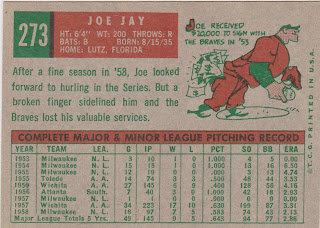 Two things right of the bat (no pun intended). No one, and I mean NO ONE, well besides Topps, ever called him 'Joe' Jay. It was Joey Jay. J-O-E-Y Jay. And I believe it was written into the U.S. Constitution that Curt Gowdy was required to insert 'he is the first Little Leaguer to pitch in the majors' at least twice an inning every time Jay was on a Game of the Week, even if it was a dugout cameo.

Joey Jay was a 1953 bonus signee of the Braves. That meant two things. 1) The Braves had to keep him on the major league roster for awhile and 2) he didn't get into many games so he had lots of free time to count and recount his bonus money. He made the majors in 1958 after the Braves were finally able to let him get seasons on the farm. He pitched well, too, at least for awhile. After grabbing a starting slot in June he won 7 of 11 starts for the defending Champs and them was shelled in an August start. He pitched only once more that season, a September start against St Louis in which Irv Noren wacked a ball off Jay's hand and ended his season.

After two more middling seasons with the Braves Jay was traded to the Reds and suddenly was anchoring their staff along with Jim O'Toole and Bob Purkey. He won 20 or more in both 1961 and '62. He pitched in the '61 Series and beat the Yanks in the only game the Reds won. He made his only All Star squad in 1961 but didn't pitch in either game that year.

That meteoric rise ended pretty much as soon as 1962 ended and Jay only broke 10 wins once after that. He was done with the majors after a short stint back with the Braves late in 1966.

Joey Jay's story is actually a pretty interesting one and it's nicely written up on the SABR site. Jay apparently cut all ties with baseball in retirement. Did o.k. for himself in the oil business, though.

Why Joey Jay is pictured as a better on his '59 Topps is not known to me. Maybe he was talked into it by Warren Spahn and Lew Burdette, two guys known for their sense of humor. Jay was actually a pretty lousy hitter.
Posted by Commishbob at 7:48 AM