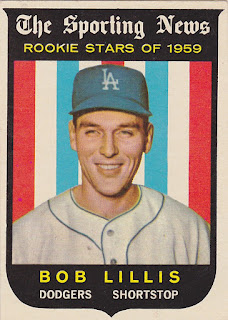 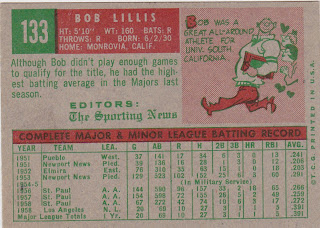 Bob Lillis might have been a "Rookie Star" in 1959 according to the Sporting News but he was no fresh faced kid. Lillis had been drafted by the Dodgers in 1951 and prior to that he'd been a multi-sport athlete at USC (where, if you are to believe the cartoon, the chicks really dug him). Lillis spent most of the decade in the Bums' minor league chain and serving in the military. That'll happen when you have Pee Wee Reese ahead of you in the organisation's food chain.

When he finally had a shot at starting in 1958 he got hurt and the job went to Maury Wills. Lillis was soon traded to St. Louis and then was drafted by the expansion Colt 45s. He was that club's MVP in their first season hitting .249. Lillis remained the team's infield anchor until the young duo of Joe Morgan and Sonny Jackson claimed the middle infield for Houston. Lillis retired as a player after the '67 campaign.

He went on to fill a number of front office roles for the Astros and served as a coach and finally manager in the mid 80s. He was runner-up in the Manager of the Year vote in 1983. He later coached on the San Francisco staff for more than a decade.

Posted by Commishbob at 3:06 AM