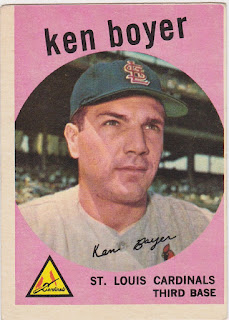 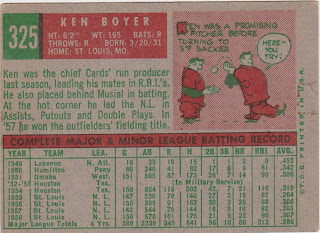 I would have bet that Ken Boyer had played in more than one World Series. But 1964 was his only post season appearance. Live and learn. He's the brother of Clete Boyer who we've seen here before.
Ken broke in with the Cardinals in 1955 after four season in their chain and a military stint of two years. Boyer held down the third base spot for 11 seasons in St. Louis (with a year of centerfield duty tossed in. He made seven All Star squads, won five Gold Gloves and was the NL MVP in the Cardinals' World Series winning season of 1964. He hit a crucial grand slam off Al Downing in Game Four of that year's Series, a 4-3 Cardinal victory.
Traded to the Mets for the '66 season Boyer had a couple of full time seasons in him before his production and playing time tailed off. He wound up his career with the White Sox and Dodgers. He retired in 1969.
Boyer is the second most prolific righthanded power hitter in Cards history. His home run total trails only Albert Pujols.
There is a Ken Boyer  memorial/tribute page here.
The Cards were assigned nine of the pink framed cards found in the '59 set. Takes a real man to be on a pink card and look as self-assured as Ken Boyer does here.
Posted by Commishbob at 7:22 AM