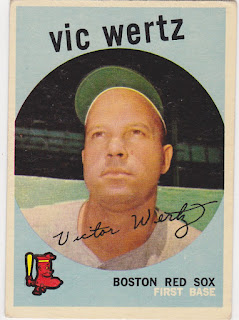 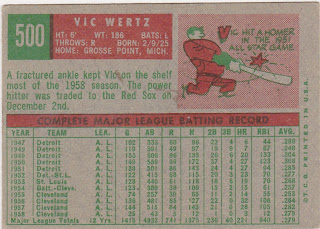 Getting the obvious out of the way first... yes, this is the guy that hit the shot in the 1954 World Series that Willie Mays pulled in for one of the most famous baseball plays ever.

But Vic Wertz is much more than a trivia answer. He's a four time All Star and a four time Top 10 MVP vote getter. He's also a World War II vet, a 17 season American Leaguer and a guy with an 8 for 16 World Series batting mark. A Pennsylvania native Wertz spent three seasons in the minors after signing with the Detroit Tigers in the early 40s. He sandwiched in an Army stint and then made the Tigers major league squad in 1947.

As an outfielder Wertz put up some solid seasons with good power for the Tigers until he was traded to the Browns in 1953. He moved with the Browns to Baltimore for 1964 but a slow start prompted a trade to the Indians. He took over at first base for the Tribe and helped them reach the World Series against the Giants. In that Series Wertz batted .500 and hit a homer. Even though the Giants swept the Series Wertz must have been thanking his lucky stars for the trade that had brought him from a team on its way to a 100 loss season to the American League champs.

Wertz continued to star for the Indians until, as noted on the back of his card, he lost most of the 1958 season to a broken ankle. He was traded to the Red Sox where he had some hitting success. As his career wound down he was back in Detroit and finally a short stay with the Twins in 1963.

He finished with 266 homers and a .277 career average. Although he never led the league in an significant category he had many top five and top ten totals in power numbers throughout his career.

Vic, in his Indians gear (now disguised) gazes towards the upper deck at Yankee Stadium from the usual spot in front of the third base side dugout. If the shot was from about three or four years later I'd say he was looking up at me and my father.

Posted by Commishbob at 7:16 AM