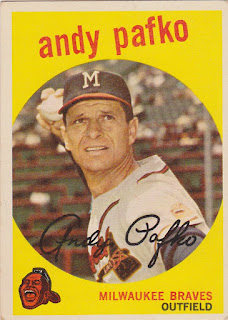 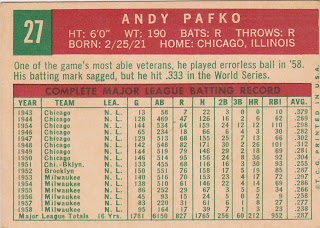 When this card came up in the rotation I knew I had to ask for a contribution from the #1 Andy Pafko collector, Matt F. who authors Heartbreaking Cards and has a super Pafko collection. So I turn this blog over to Matt:


As an Andy Pafko Super Collector, the 1959 Topps Andy Pafko card, #27, holds a special place in my collection.  Andy's '59 Topps would prove to be his last as an active player [although he would appear in the 1960 Topps's set as a Milwaukee Braves coach].  And he certainly went out with a great looking card compared to his relatively boring '54, '57, and '58 Topps cards.  I'm glad that he got the yellow border rather than the light blue which a number of the Braves had in the set.  In total, I have four copies of this card.   Some in very good condition...some with little added comments by a previous card owner.
There is one aspect of this card that holds it back from obtaining an elite status in my Pafko collection and it is something tedious for most collectors.  The reason I am a Pafko collector is that he was born in Boyceville, WI which is just a little drive from my hometown of Eau Claire, WI.  On some Topps releases it lists birthplace as well as current home and it was always great to see Boyceville listed on a card.  In the '59 set Andy is just listed as living in Chicago and so it can never rate with those "Boyceville cards" unfortunately.

Thanks, Matt! Much appreciated. I felt that this post just wouldn't be 'official' without your input.

Just a few background notes on Andy Pafko....
He played for the Chicago Cubs in the 1945 World Series. That was their last Series appearance.When Bobby Thomson hit the 'Shot Heard 'Round the World' the Dodger outfielder standing at the left field wall looking up helplessly was Andy Pafko. In addition to the '45 Series with the Cubs he played on three other Series teams, the 1952 Dodgers, the 1957 Braves (with whom he won a World Championship), and the 1958 Braves.

Here is a short but informative online page about Pafko.
Here is his Baseball Reference page.
And finally, Matt owns four (!) copies of the '59 Pafko. He sent along a couple of scans. 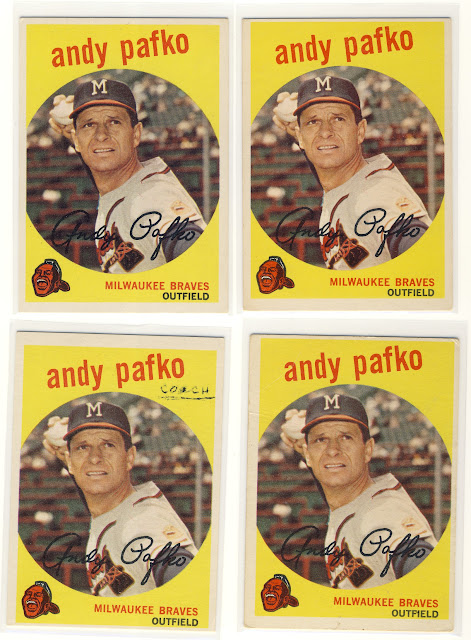 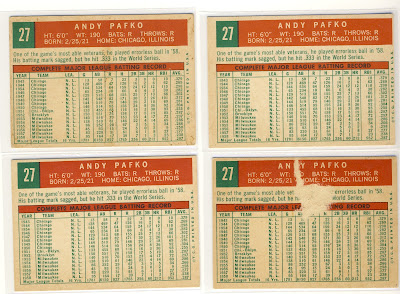 I like the one on which a young collector has helpfully added the word 'coach' to the front of the card. While it might take away from the grade that the card would get it adds a certain charm in that I can picture a 12 year old in 1960 'updating' his collection with a notation on Andy Pafko's new role.
Posted by Commishbob at 6:21 AM