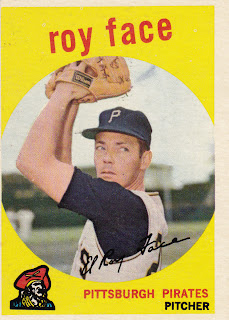 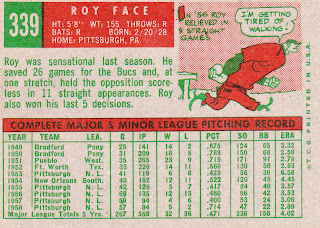 I can't recall anyone calling him 'Roy'. I always referred to him as 'Elroy' Face. No matter. He was a real relief star of the late 50s and 60s. In an era when save totals were much lower than they are now Face led the league three times, once with 17. He was among the first to take on the role of 'closer' as we know it today. He featured the 'fork ball', a unique pitch he learned from the Yankee's Joe Page.
In 1959 he won 18 games and lost only one, all in relief. He finished seventh in MVP votes that year. Face made three NL All Star squads. In the 1960 Series against the Yankees he saves three of the four Pirate victories. He was property of the Pirates after being drafted off the Brooklyn Dodgers roster in 1952. The Dodgers had drafted him from the Phillies. Branch Rickey was the 'drafter' in both cases. He had begun as a spot starter and reliever but quickly found his place in the bullpen.
He finished his major league career with a brief look by the Tigers and a year in Montreal with the fledgling Expos in 1969. He then pitched a bit of minor league ball in 1970 before exchanging his glove for a band saw and making his living as a carpentry foreman.
I like how Face posed for this card by taking a peek over his shoulder as a reliever would who had entered a game with a runner on. Aside from the mis-cut this is one of the better conditioned cards in my set.
Posted by Commishbob at 8:12 AM