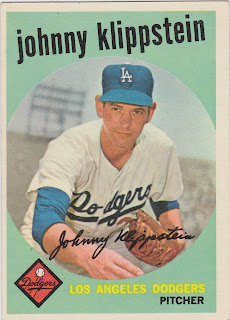 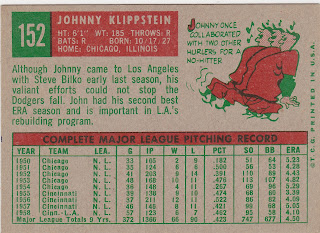 I remember seeing Johnny Klippstein pitch but I was very surprised to find that his pro career went back to 1944. He was property of the Cardinals, Dodgers (and Uncle Sam for 1946) before he debuted with the 1950 Cubs.
Beginning as a spot starter and reliever he held that sort of role for the Cubs and Reds until 1958 when he was traded back to the Dodgers mid season. From that point he called the bullpen his home as he pitched for the Indians, Senators, Reds (again), Phils, Twins and Tigers until he retired after the 1967 season. 18 major league seasons for eight different teams. Along the way he acquired the nickname of "Wildman" because of the control problems he suffered throughout his career.
Klippstein pitched in the '59 Series for the Dodgers and the '65 Series for the Twins. He led the AL in saves in 1960 and the NL in hit batsmen in 1956. He led each league once in wild pitches.
Klippstein, who began his career with the Cubs, remained a Cub fan right up until his death in 2003. He passed away at home in Chicago after a long string of health issues. He'd been a season ticket holder at Wrigley Field.
This was one of my #1 priority upgrades at the card show last week. It's one of my five favorite cards among those I've already posted. Classic baseball card follow-through pose, terrific light green border complimenting the Dodger colors well. Really great card all the way around. My original copy had a crease and very soft corners. For a buck or two I grabbed this much nicer one.
Just or fun here are his first and last regular baseball cards. There were a lot of miles and a lot of walks between these two shots.
1951 Bowman and 1967 Topps 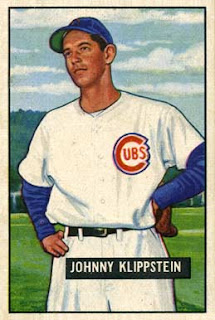 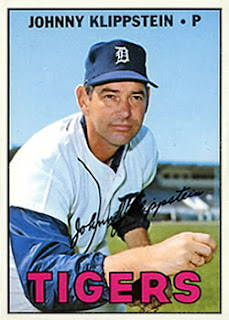 Posted by Commishbob at 7:40 AM