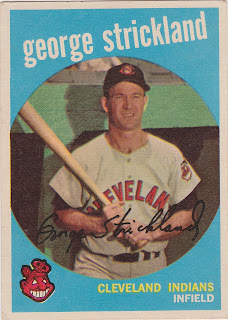 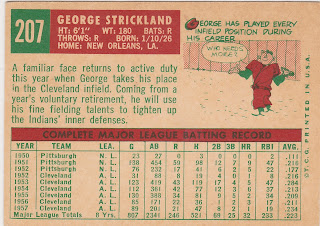 And here we have George "Bo" Strickland, good field, no hit (much) infielder for the Pirates and Indians. Strickland was a Dodger signee who played a year in their system (1943) and then gave two years to the service of his country, serving in the Pacific.
Upon returning Strickland was obtained by the Red Sox and after a whirl in their system was drafted by the Pirates. He debuted with the Bucs in 1950. By 1951 he'd claimed the full time shortstop job but hit only .217. After a slow start in '52 he was dealt to the Indians.
He was the regular shortstop in Cleveland in 1953 and hit a very respectable .284, a career high. But his numbers at the plate declined and eventually so did his playing time. He was hurt in 1954 but was able to return in time to get nine at bats in the Series against the Giants. He went hitless.
By 1958 he had decided to retire (as noted on the back of the card) but returned for another major league spin in 1959 and was again a full time player that year, now at thirdbase. Again after a slow start in 1960 the Indians released him and Strickland's career on the field was over.
He coached for several teams through the 1960's and had a couple of brief turns as the Indians' manager. He later worked as para-mutual manager for Fairgrounds Race Track in New Orleans. He died in 1990.
Strickland seems to be smiling in a lot of his photos. I'm glad to see a happy player. This is an upgraded card in my set. Pretty good shape with good corners. I spy Yankee Stadium green on that dugout. And, as an aside, that jersey he's wearing is nearly identical to the ones the Indians wore on Sunday against the Astros. They looked very nice.
Posted by Commishbob at 8:07 AM