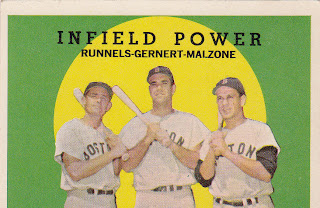 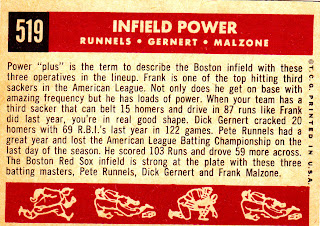 I guess 'Power' is a relative term. This card features Pete Runnels, Dick Gernert and Frank Malzone of the Red Sox.
In 1958 Gernert hit 20 homers, good for 12th in the AL. Malzone had 15 which placed him in a tie for 20th but Runnels had which tied his career high to that point and was only the second time he had hit more than three. To be fair, Runnels did nearly win the batting title in '58 but 'power'? I can't see it.
Malzone and Runnels played in the first games I ever saw at Memorial Stadium in June of 1962 when they both started both ends of a doubleheader against the Orioles. Neither did anything special. I did see Carl Yastrzemski homer off Milt Pappas and Boog Powell hit a titanic homer over the hedges in center field. He was the first to ever reach that spot with a dinger.
Posted by Commishbob at 8:58 AM