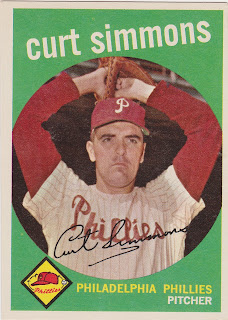 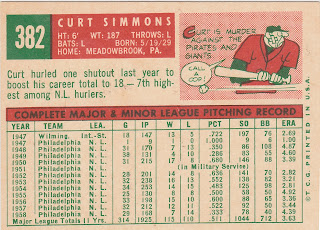 Curt Simmons was a highly sought after high school and amateur pitcher in his Pennsylvania region in 1947. The Phillies landed him with the largest bonus ever paid to that point. The Phils had, in fact, agreed to play an exhibition game in Simmons town in the summer of '47 in order to get an up close and personal look at him.
The 'bonus baby rules' in effect at the time allowed Simmons one year at the minor league level and then the Phils carried him on their roster for a couple more before he became a front-liner in 1950. He won 17 that year and received a bit of MVP consideration. He was called to the National Guard before he had any chance to pitch for the 'Whiz Kids' in the Series that season.
He had quite a bit of success for the Phils over the next decade, winning 86 games for some weak Phillie clubs. He made three NL All Star squads during that time. After a sore arm caused the Phils to release him in 1960 Simmons signed with the Cardinals and got his second wind.
The veteran lefty backed up ace Bob Gibson for a St. Louis club that won the '64 pennant and gave him his only taste of the post season. He made two starts in the Series against the Yanks, pitched well despite losing his only decision and got a championship ring.
After one more effective season Simmons wrapped up his career with the Cubs and Angels before retiring following the 1967 season.
His hometown of Egypt Pa. held a parade and a day in his honor just this month. One interesting anecdote from Simmons amateur days concerns a Legion Baseball All Star game he pitched in. The 'managers' were Carl Hubbell and Babe Ruth. Supposedly when Ruth saw Simmons hit and play the outfield after his turn on the mound he suggested to Simmons giving up pitching to concentrate on his other baseball skills.
Pretty much a standard pose here, Connie Mack Stadium and a green border make a nice frame of the bright Phils duds Simmons is wearing. Clean card with nice corners, too.
Posted by Commishbob at 6:47 AM