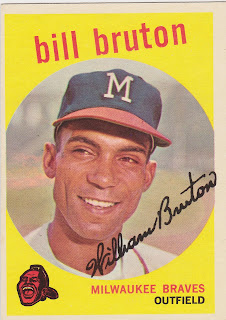 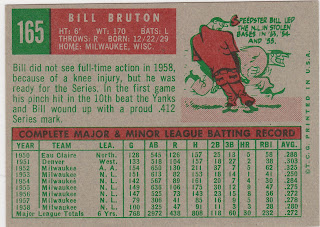 Bill Bruton sure looks happy. I'll bet he looked the same way when he broke in with the Braves in 1953 and began his career with a 10 for 18 run in the first four major league games he played. He hit the first homer ever in County Stadium, a walk-off job against the Cardinals in his second game ever.
Except for a serious knee injury that sidelined him in 1957 he was the Braves centerfielder through 1960. He missed the '57 Series but was 7 for 17 with a homer in the 1958 Series loss to the Yanks. He led the NL in steals his first three seasons. On August 2 of 1959 Bruton his two bases loaded triples against St Louis. Hank Aaron, Joe Adcock and Andy Pafko were the guys scoring on both triples. (Wikipedia states he hit three triples, how shocking that they are wrong!)
Bruton was traded to the Tigers after the 1960 season and he only yielded his full time slot at the Tigers centerfielder in his final season, 1964. Bruton hit a career .273 and played a solid game defensively. I'd say he's one of the better players who never made an All Star team. Of course in those days there were some pretty solid centerfielders in both leagues.
Bruton is a member of the Delaware Sports Hall of Fame.
Nice looking card in very nice shape. Again the Milwaukee cap puts it over the top. That and the sharp corners.
EDIT:
It was brought up in the comments that the back of the card lists Bruton's date of birth as 12/22/29 while Baseball Reference and several other sites I checked have it as 11/9/25. That's a big difference.
Bruton's 1963 (and the '61) Post Cereal card also list the 1929 date. Interesting.
(This is a borrowed image) 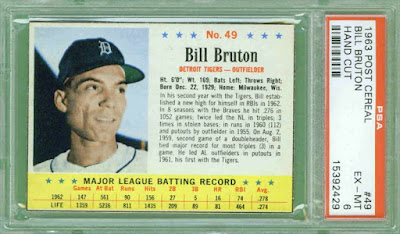 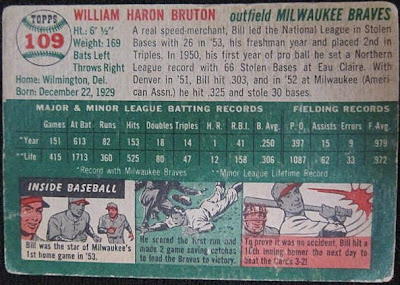 Posted by Commishbob at 6:05 PM