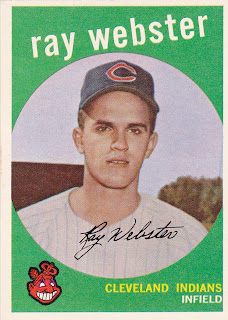 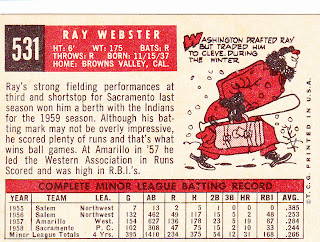 Ray Webster is a high number card in the '59 set and they command somewhat of a premium. Webster's short major league career doesn't justify the cost. He was plucked from the PCL by the Indians in 1958 and made his debut in '59.
That year he appeared in 40 games as an infielder and hit .203 in 73 at bats before a late season call to military service. He was then traded to the Red Sox where he played in a handful of games in 1960 before returning to the minors for good. He retired after the 1963 season and has owned an insurance company in California ever since.
Playing on the same field as Ted Williams is one of the thrills listed by Webster in recounting his career. I bet he's not alone there.
An unremarkable card design wise. But in pretty nice shape overall.
Posted by Commishbob at 7:10 AM