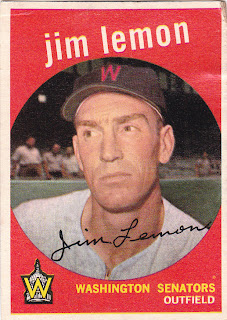 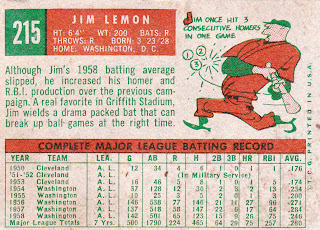 After some limited action with the Indians in 1950 and 1953 (sandwiched around a military tour) Jim Lemon was purchased by the Senators and went on to play six seasons as a regular for the Nats/Twins franchise. Over that time he hit 143 homers with a couple of 30+ totals.
Lemon never hit over .284 and tended to strike out quite a bit but he did make the 1960 AL All Star squad and he led the AL with 11 triples in 1956.
As his career wound down he played with three clubs in 1963 (the Phils and White Sox in addition to the Twins) and called it a day. He stayed in the game as a coach for the Twins and as manager of the expansion Washington Senators.
He's a member of the Virginia Hall of Sports Fame.
A stained corner and gum stained back detract from my copy of this card. But the most interesting aspect is probably Lemon's expression. I think he saw something far more interesting than the Topps photographer off to his right.
Posted by Commishbob at 8:07 AM