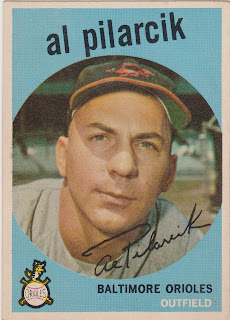 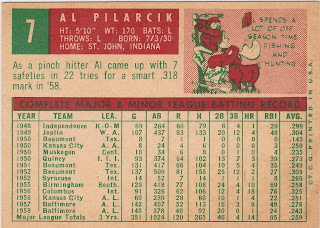 Al Pilarcik is yet another player who spent time in the minors then did military duty before being dealt to a second organization with whom he made his major league debut.
Pilarcik, an Indiana boy, was signed by the Yankees in 1948. He spent four years in their system then went to Korea for the '53-'54 seasons. Upon his return the talent-rich Yanks traded him to Kansas City and he debuted with the A's in July of that year. After the season he was traded to the Orioles and he spent four season in Baltimore.
He was a starting outfielder for the Orioles for much of that time, hitting a career high .282 in 1959. It was in the 1960 season that he got a 'brush with greatness' when he caught the flyball that Ted Williams hit in his next to last at bat (Ted's final out) and was in rightfield when Williams homered over his head in his final at bat before retiring.
Pilarcik spent the 1961 season back with the A's and then the White Sox before retiring himself. He earned a masters from Purdue University and taught and coached for the next 31 years. Al Pilarcik died in 2001. He's a member of the Indiana Baseball Hall of Fame.
You can catch a brief (and I do mean brief) view of Al Pilarcik as the Ted Williams homer sails over his head and into the Sox bullpen.
Posted by Commishbob at 11:06 AM