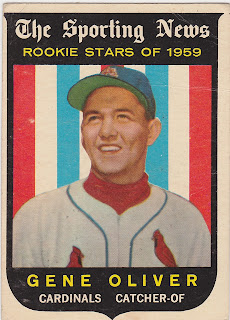 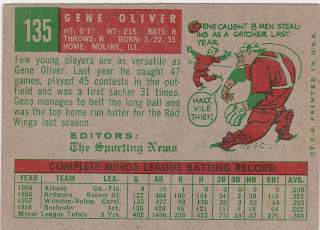 Gene Oliver spent three productive seasons in the minors and was well on his way to another one when he was called up to the Cardinals in early June of 1959. He put up some decent numbers for the club the rest of that year but not good enough to keep him in the bigs.
He made the Cards as a nearly every day player in 1962 and in 1963 was dealt to the Braves. He spent four more years there and showed good power while playing in left, at first and behind the plate. Stops with the Phils, Red Sox and Cubs rounded out Oliver's playing days.
He retired in 1969 and his post playing days included some minor league coaching, a fling in Illinois politics and working with Randy Hundley's fantasy camp organization.
Oliver was the only player to hit over .400 against Sandy Koufax among those with 50+ at bats. He died in 2007.
Check the cartoon caption.."Halt Vile Thief". LOL
Posted by Commishbob at 7:33 AM