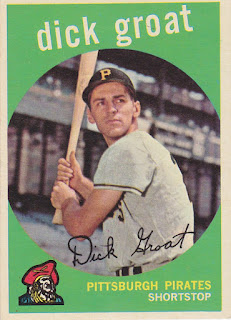 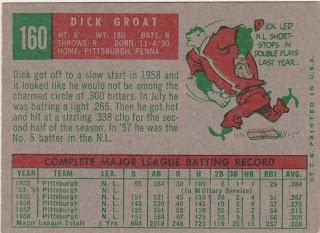 Looked at Gene Conley recently and here comes another two sport star, Dick Groat. He starred on the diamond and on the basketball court and has been quoted as saying that basketball was his better sport.
At Duke University Groat was a two time All American in basketball, named the Helms Foundation Player of the Year in 1952 and UPI Player of the Year in 1952, and earned his way into the National Collegiate Basketball Hall of Fame. Duke retired his uni number.
Groat played a year of professional hoops for the NBA's Fort Wayne Pistons but after a military service term he never went back to basketball. He did stick with baseball, however, and went on to a fine career with four NL teams, primarily the Pirates and Cardinals. He was NL MVP in 1960 as a part of that Pirate World Series team. And he won a second ring with the 1964 Cardinals and finished second in MVP votes that year.
He was a fine fielder as well, consistently ranked among stat leaders.  He made five All Star squads by the time he retired in 1967 as he finished his career with part time work with the Phils and Giants.
He owns a golf resort in Pa. and does color for Pitt Panther basketball. He's an interesting guy worth perusing further. Wikipedia is a good place to start.
Pretty sweet card. I always like to see shots taken in the Polo Grounds. Check out the apartment towers visible through the stands.
You can see them here.

Posted by Commishbob at 7:01 AM