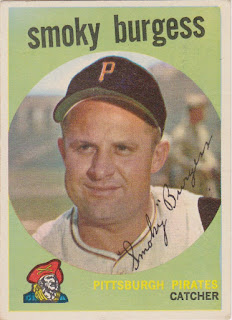 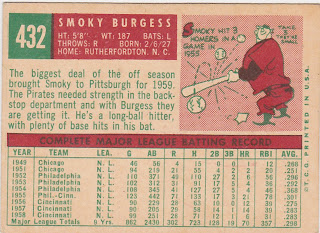 Good Ol' Smoky Burgess. As kids we thought it was cool because he looked like everyone's quiet Uncle Phil yet was playing baseball. He always reminded me of the school crossing guard who was planted at the corner of Centre St. and St. Mary's Place in Nutley, New Jersey where I was a kid.

Burgess had a reputation as a great pinch hitter, it was a well deserved reputation but it came later in his career. After signing with the Cubs in 1944 he put together a playing career which lasted through the 1967 season.

In his prime Burgess was a solid semi-regular catcher with the Phils, Reds and Pirates. His best season was probably 1955 when he hit 21 homers to go along with 78 RBIs and a .301 average. He had been traded from the Phils to the Reds three weeks into the season and then made his second of six All Star clubs.

He retired following the 1967 campaign with a .295 career average and the record for lifetime pinch hits (195). That record has since been surpassed. After his playing days he had a car dealership in his native North Carolina and spent many years managing and coaching at various levels of the Braves organization.

Smoky got the 'airbrush' treatment on his '59 card. He was likely wearing Reds' gear when the picture was snapped in Los Angeles. Over his shoulder we see a figure that appears to be either: an usher, another air-brushed Reds player, or the ghost of Shoeless Joe Jackson. 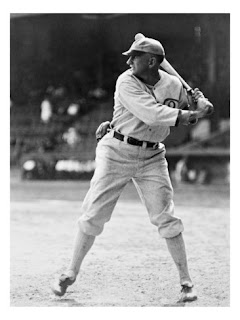 Posted by Commishbob at 8:22 AM