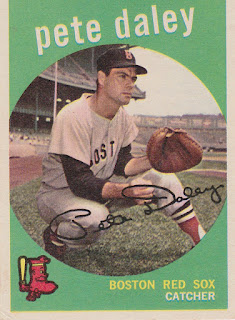 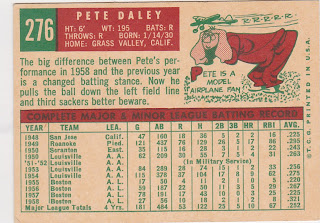 Pete Daley signed with the Red Sox in 1948 and worked his way to the big leagues one step at a time, finally arriving in Boston in 1955. Along the way he had spent two years in military service. He brought with him a reputation as a fine defensive player with issues at the plate and that's about how his career played out.

He served as a back-up to Sammy White for most of his five season with the Bosox although he got 200+ plate appearances in both 1956 and '57. He actually hit .321 in his very limited duty in 1958. After the 1959 season he was traded to Kansas City where he saw his at bats reach a career high (228) and that year he hit a respectable .263. He played alongside, but was no relation to, pitcher Bud Daley that season.

Drafted by the expansion Senators for the 1960 season Daley again was in a time-share role and after he spent the 1961 season in the minors he called it a career.

Following his baseball days he managed a bowling alley (btw... have you ever passed a bowling center that DIDN'T have a "Leagues Now Forming" sign out front?). He went on to work for the Schick Razor Company and what his Baseball Reference Bullpen page called the "English Leather Company". By that I'm guessing they were referring to the Mem Company which was responsible for the original English Leather cologne.

Not to go off on too deep a tangent but... English Leather!!! That was my favorite fragrance when I used to use that stuff as a teenager. I'm thrown back 45 years whenever I see a reference to it. And if I see a bottle these days (they still sell a reasonable facsimile at Sears and CVS) I can't help but douse myself with the tester supply. What high school girl in 1967 could resist that incredible aroma? Apparently most could judging by my social life in those days.

Posted by Commishbob at 8:02 AM